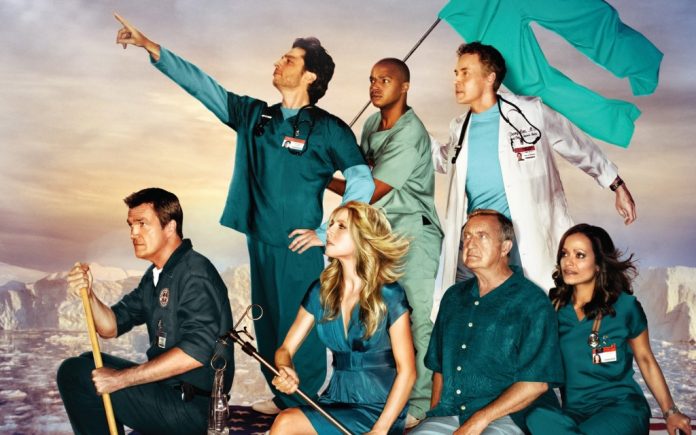 Although no longer on our screens, Scrubs was one of America’s most resonant and irresistible programmes – delicately balancing cringe-inducing comedy with painful pathos, the long-running American sitcom achieved this through a stellar soundtrack. The songs chosen always helped elevate the storyline’s emotional arc, whether it be one of Turk’s zaniest moments or a trademark JD self-battle.

Scrubs, which starred Zach Braff and Sarah Chalke, aired for nine years and music was a huge part of its show – sometimes incidental, in the case of lawyer Ted’s band The Worthless Peons and the episode of ‘My Musical’. However, more prominent were the songs that were plucked from the vaults. Here are some of the most arresting and effective tracks that aired during the show’s run.

MODEST MOUSE – ‘Missed the Boat’ (Episode: My Waste of Time)

Scrubs was starting to wilt around this period, particularly with Braff becoming more of a transient figure and the lack of cohesive storylines. However, My Waste of Time makes the most of this state of flux – Dr Cox is beginning to revel in his new role as Chief of Medicine (although the previous incumbent, Dr Kelso, is still lingering around), while JD and Elliot try to rekindle their past relationship, and find that they have drifted apart. Soundtracking this is esoteric Portland rockers Modest Mouse, whose jangly reflection ‘Missed the Boat’ came bouyed by a classic Johnny Marr motif.

Whether or not Zach Braff was as involved in the Scrubs soundtracks as he was for his films remains to be seen, but one group often called up to the plate are wistful Californians Toad the Wet Sprocket. ‘Something’s Always Wrong’, with its contemplative guitar riff and Glen Phillips’ reflective growl, added pathos to the scene in which JD finally realises his older brother is not the world-beating breadwinner he envisioned.

Another popular choice for Scrubs episodes, power pop legends Cheap Trick helped usher in the JD / Elliot romance with ‘I Want You To Want Me’. However, it’s their barnstorming, glam-tinged anthem ‘Surrender’, with its chorus of “mommy’s alright / daddy’s alright / they just seem a little weird” highlighting the feelings of indifference the main characters have for their parents.

One of Scrubs‘ many plus points was its ability to plumb songs from the strangest corners to really affect the emotion of a scene. On the surface, wobbly-headed troubadour David Gray may seem an odd fit, but his slightly skewed, off-kilter apology ‘Please Forgive Me’ soundtracks one of the show’s first, and most pivotal, scenes – JD feeling way over his head.

JOSEPH ARTHUR – ‘In the Sun’ (Episode: My New God)

In the early noughties, Joseph Arthur was almost inescapable. The songsmith’s breathy, yet grizzled, vocal delivery meshed wonderfully with his numerous guitar techniques, not least on the delicate lament ‘In the Sun’. The song, which has been covered from everyone from Coldplay to R.E.M., soundtracked Dr Cox’s son Jack’s baptism, in which all the anger and resentment the regulars had been feeling gets washed away at the sight of a new life being ingrained into society.

Barenaked Ladies enjoyed a regular slot soundtracking Scrubs, and when listening to the Canadian band’s brand of music, it’s no surprise – chief songwriters Ed Robertson and Steven Page had a gift for combining seemingly goofy subject matters with heartfelt urgency. On the surface, ‘If I Had A Million Dollars’ is a deceptively throwaway slice of immature ambition, but within its lofty ambitions is a track of yearning wistfulness.

Christian rock band The Fray didn’t have much longevity, and their staple song ‘How To Save A Life’ was used ad infinitum around a slew of television shows. Its most poignant and arresting use, though, came in ‘My Lunch’, where Dr Cox, stressed from a devastating mistake, finally loses it. The fact it came straight after a trademark ‘The Todd’ scene is even more remarkable.

Scrubs had the ability to make the viewer laugh one minute and cry the next, but it perhaps never hit such weepy highs as it did in ‘Episode’. As Dr Cox finally comes to terms with his best friend’s untimely passing, the autumnal, gentle ditty of ‘Winter’ allows the curmudgeonly doctor to finally express some emotion.

Fountains of Wayne were a perfect fit for Scrubs – ‘Stacy’s Mom’ aside, the four-piece revelled in white-collar mundanity and the minutae of American suburbia. ‘Hey Julie’ keeps the band’s wry humour in check over a folk-tinged acoustic guitar riff, as the drudgery of punching the clock is counterbalanced with seeing your one true love again.

THE CORAL – ‘Dreaming Of You’ (Episode: My Monster)

The relationship between JD and Elliot fueled the show’s run in the romantic field, but before they firmly became an item they gave into their temptations in a big way as the pressures of work were given a sexy release valve. Soundtracking a rather sultry scene, stuffed dog aside, is Liverpudlian skiffle merchants The Coral and ‘Dreaming Of You’.

Not many episodes centred around a song itself – coming close was Colin Hay’s ‘Overkill’ – but on ‘My Best Friend’s Mistake’ there are thirty minutes devoted to Andy Bell’s ’80s staple (sorry, Wheatus fans). The song becomes a running thread throughout the episode, and even the surly Janitor allows himself a line or two while doing some undesirable toilet maintenance. The message is clear, though – no matter what position of authority you find yourself in, you deserve the respect of others, preferably with the beats of an ’80s ballad.