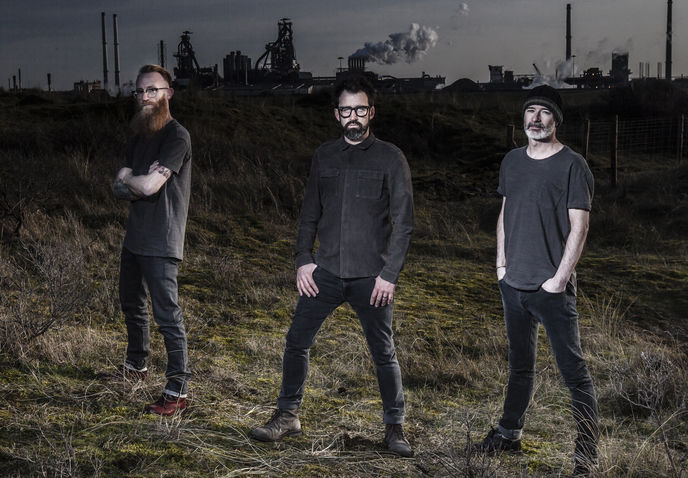 In a varied career, Neil Cowley has performed with Zero 7 and The Brand New Heavies, picked up Jazz FM’s Artist of The Year, saluted the musical talent of Dudley Moore, and helped Adele become one of the biggest artists of the century.

For his latest project, Cowley finds himself moving in another, new direction.

Spacebound Apes is an ambitious cross-platform project from the Neil Cowley Trio. There’s an 11-track instrumental album, featuring the drifting Weightless and punchy The City And The Stars, but also an accompanying book, an online presence, videos and illustrations, and a live show (which comes to Birmingham’s CBSO Centre on 4 March 2017).

Together, these elements tell the story of Lincoln, whose life is transformed when he’s lured into the orbit of Autoscopine Industries.

Has the initial concept/ story for Spacebound Apes grown since its inception? If so, how?

I remember the first day of recording. The idea was pretty raw. I had the basic tenet but no meat on the bone. I had enough to convey the idea to the other two guys in the band [drummer Evan Jenkins and bassist Rex Horan]. But it was only once the album had been recorded and I sat down to write an 11 chapter book (plus a six month long online preface blog!!) that I got to grips with the project. At that point Lincoln started to take on a life of his own. Naturally as his character developed I had little choice but to change a detail here and there. The conclusion to the story I think is different from the original idea, though I’d be hard pushed to remember what it originally was! Then there was the introduction of the illustrations by Sergio Sandoval. He was an Oscar winner for his art direction on Pans’ Labyrinth and is now a DC comic artist. When I saw his drawings they inspired me in different directions. Little details, like whether Lincoln was married or not, gave me cause for long pause as I imagined the implications of heading in one direction or another. These are, of course, the daily trials of being an author. But for a musician with a pen, these are new experiences!

Did you always envisage Spacebound Apes as a multi-media/ cross-platform project?

I did. I wanted it to be more than just an album. I wanted this to really mean something to people on many different levels.

How does it feel looking back, now it’s all out there?

If I’d known the amount of work it would take to get it all of the ground I may not have started, but now I look back at the result, I’m tentatively proud of what we’ve achieved … just to be able to enjoy other people’s contributions and to see experts from other fields create whilst reflecting on the music; and to have an influence on that creativity has been wonderful.

As soon as you mention ‘space’ and ‘apes’, it’s hard not to think of Pierre Boulle’s Monkey Planet (a book that’s quite different in tone and story to the film it inspired, Planet Of The Apes). Were you aware of the book – with the ape floating in space, and the idea of a story written by someone else? Was it a source of inspiration?

I am aware of the book, but I don’t think it influenced this project directly. This project was directly inspired by another book [Arthur C Clarke’s The City And The Stars]. Though not a year goes by without immersing myself in Planet of the Apes the movie. I have a flashback in my mind of opening the first pages of Pierre Boulle’s book, perhaps on a dusty bookcase in a holiday home somewhere. But I certainly didn’t read the book in full. My half/half ape character is designed to connect with the album title … to highlight our inner ape selves. For those that hold the theory of evolution as the cornerstone to their daily lives such as myself, the figure of an ape is always a huge source of inner reflection.

Your tale begins with Lincoln, who agrees to undergo an experiment to free his mind after being lured to a mysterious lab by the promise of romance … (without giving too much away) where does the story head from there?

Well actually, the story starts on my Tumblr Page, six months before. We get to see Lincoln, bored with his daily life, more like a Reggie Perrin type character in a way (!) He finds an old love letter from a girl called Emmanuelle, his girlfriend from 20 years previous. He tries to track her down online and eventually gets a reply, or so he thinks. He eventually agrees to meet with her and when he arrives he discovers that the girl he has been talking to is actually a Love Algorithm, designed by a company called Autoscopine Industries. They have lured him in to become part of an experiment with a new drug. This drug will rid humankind of love as an emotion, and in so doing create a new super-efficient human, capable of achieving anything. He eventually agrees to become part of the program, which is where the published book begins. After the administration of this drug he finds himself in this inner solar system, experiencing the various planets where one or other abstract human emotion rules. Love, Duty, Endeavour, Hubris etc. After his many experiences he comes back down to earth, but not rid of love as his captors hope, but with a new ‘commandment’. You’ll have to read the book to find out what that is!

Did people around you – the band, label, management – need convincing …?

That is always my fear. That’s why I keep the creative process mostly to myself. It’s very exhausting to have to convince people all the time of your ideas and your intent. It’s much more preferable to just get on with it and then show them the final product. As it happens, those that did jump on board were such great contributors … the aforementioned Sergio Sandoval, my publishers who produced the book, Key Pro who manufactured the record… All of these guys showed a great deal of love for the project.

Performing live in Birmingham soon, will you be doing the album in full? If so, will it be ‘an immersive performance’ with visuals from the book?

We will be doing the album in full. When we played London we had the visuals as an accompaniment to the performance. But it proved so unbelievably costly as an exercise that we’ve had to put it back in the box. However, there were downsides connected with showing all the visuals. Once again, it becomes a very prescriptive experience, with no room for imagination. I think there something to be said to letting people interpret internally.

When you release your first album, you only have that to play essentially. The joy of having six albums is you can play all your ‘hits’. [Debut album] Displaced was just three guys playing raucously. It was (as it was called at the time) somewhat like Punk-Jazz. Spacebound Apes is an altogether more thoughtful affair. It has an 11 chapter book to accompany it, all about the trials and tribulations of Lincoln… our Spacebound Ape. So it’s very much a concept album. The main difference is all the atmospherics and electronics that accompany the live show on this tour. Dom Monks, our producer, helps out on stage with that, so that I can still be essentially just the piano player. Spacebound Apes is our Planet Suite [Gustav Holst’s dramatic suite] whereas Displaced was our Pills ‘n’ Thrills and Bellyaches [Happy Mondays’ third album].

Will we hear from Lincoln again in the future do you think?

I have no plans to do revive Lincoln currently. It feels like his story is complete, as is that phase in my life. It’s time for a new challenge. Though I am liable to completely contradict that statement and most other statements I make!

What’s been the impact of the inclusion of Spacebound Apes’ Grace on the ‘peaceful piano’ Spotify playlist, alongside Ludovico Einaudi, Nils Frahm, Max Richter, Olafur Arnalds, Philip Glass and others?

That has been a fascinating development. We released Grace in June last year on Spotify. After a few days it was somewhere near the 3 or 4000 stream level and we were fairly happy with that. Thinking that it had sparked an interest from our fans and made for a nice precursor to the album. Then all of a sudden about a month later I noticed that the streams had gone up by 30,000 in a day. I scrabble around trying to find the reason why and there it was, sitting on the Peaceful Piano’ playlist. Something put together by Spotify in New York. My track was sitting alongside the Ludovicos, Nils Frahms, Philip Glass types, presumable making everyone feel nice and peaceful! The thing about a playlist like that, is it just makes the track grow and grow exponentially. People save the track on their Spotify accounts and every time it plays it’s promoting the band and the Spacebound Apes album. Since then, another track, a reworking of the City And The Stars, has made it on to that playlist. Despite the preconception that Spotify don’t pay, this development has actually paid for a lot of the exuberant artistry associated with the making of Spacebound Apes. It’s dug me out a right hole in other words!!

What’s your plans for the coming months?

There are plans afoot to get a host of remixes done of Spacebound Apes. There are some really exciting new artists getting involved. Other than that, it’ll be lots of composition for me and a fair amount of live shows. With a tour of the US and Canada happening mid-summer.