A car crash at the US box office, Angelina Jolie Pitt’s latest turn behind the camera, as well as in front of it with hubby Brad Pitt, is an art house project that follows emotionally locked down former dancer Vanessa and boozing, blocked writer husband Roland through 70s France, their marriage unraveling in a quiet, seaside town. An ennui drenched study in loss, suffering and grief, almost nothing happens, but it takes forever not to. (Vue Star City)

A Christmas Star (U)

The first Irish Christmas film apparently, born on Christmas Eve (in a barn, to mom Maria and dad Joe) young Noelle believes she can work miracles and bring calm whenever situations get heated. However, when a smarmy developer returns to his native village with plans to demolish the local snowglobe factory, it seems her gift has deserted her. Unevenly acted ultra brief cameos by Pierce Brosnan, Liam Neeson and Kylie Minogue, its heart in the right place, if you happen to be under 10. (Sat 12/Sun 13: Vue Redditch, Star City)

The latest from writer-director Paul Weitz gets a very low key release, with Julia Garner as Sage, a teenager facing an unplanned pregnancy, who turns for help to her acerbic, spiky grandmother (Lily Tomlin), a free spirit lesbian poet woman with a secret soft heart, but who also happens to be long estranged from Sage’s fiery high-flier mother (Marcia Gay Harden). A simply story with a complex heart. (Everyman; Vue Star City)

Another under the radar release, this writing and directorial debut by actor Jake Gavin is a powerful portrait of homelessness in contemporary Britain and the lives of those living on the margins of society. Case in point being the titular transient, Hector McAdam, who, portrayed by Peter Mullan, has been living around the country’s motorways. Taking his annual pilgrimage for Christmas from Scotland to share friendship in a temporary shelter in London, with mortality looming he finds himself driven to reconnect with his estranged real family, who he’s not seen for 15 years. (Vue, Star City)

Ineptly made, badly acted, no budget deranged killers Christmas horror sequel, mostly made of footage from the first film served up with wry commentary as a Trash Film Night special (Saturday, Dec 12: Electric)

Star Wars The Force Awakens (12A)

With no advance screenings and the cloak of secrecy, it’s a bit hard to say anything other than this is shaping up to be one of the biggest openings ever. You know the basics. It’s set some 30 years after the death of Darth Vader, the dark side is resurfacing in the form of Kylo Ren (Adam Driver), a commander of the First Order in whom the Force is strong, former stormtrooper Finn (John Boyega) has switched sides, is in possession of the missing Luke Skywalker’s lightsabre and hooks up with Rey (Daisy Ridley), a scavenger on the desert planet Jakku, and the Resistance, by way of X-wing pilot Poe Dameron (Oscar Isaac), and Han Solo and Chewbacca are back, along with R2D2 and CP30. Thankfully, George Lucas has handed the reins over to JJ Abrams and writers Lawrence Kasdan and Michael Arndt, so it’s got to be better than the last lacklustre trilogy. The trailers certainly look like it. (From Thursday, Dec 17: Cineworld 5 Ways, NEC, Solihull; Electric; Empire Great Park, Sutton Coldfield; Everyman; Odeon Birmingham, Broadway Plaza, West Brom; Reel; Showcase Walsall; Vue Redditch, Star City) 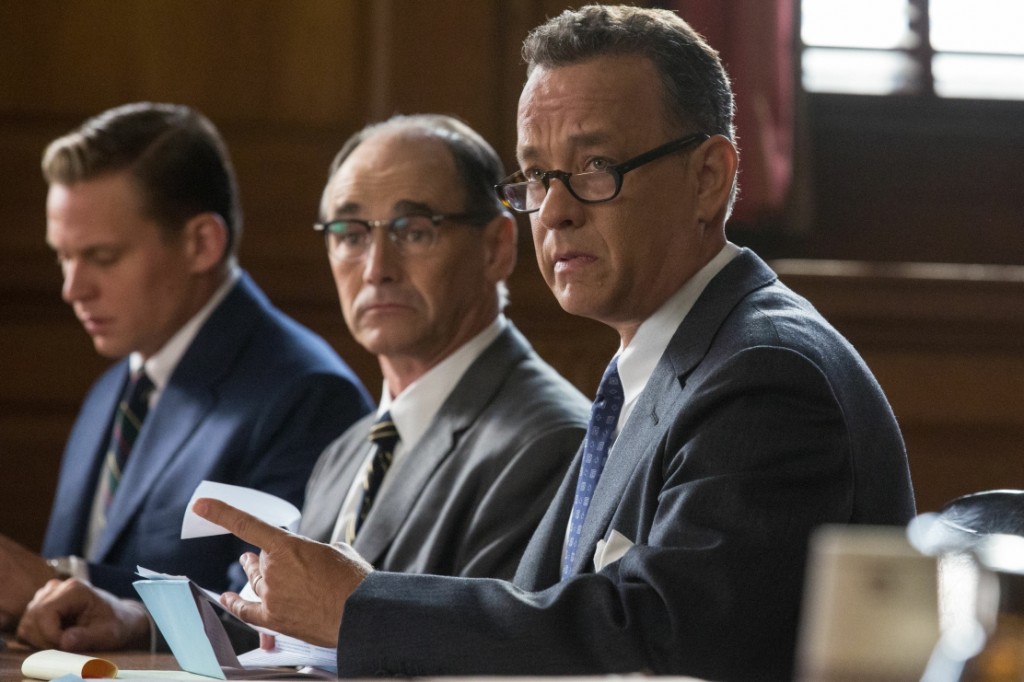 Saoirse Ronan heads the Best Actress tips for her outstanding portrayal of a young Irish girl who, in search of a better life, leaves her small-minded village in 50s Ireland for the US, boards with a bunch of extrovert girls in a house run by an eccentric landlady (Julie Walters), gets a job in a department store and falls for a young but poor Italian. But then tragedy calls her home, where she’s courted by a well to do local lad (Domhnal Gleeson) and finds herself caught between two worlds and two choices.  (Odeon Birmingham; Everyman; Vue Star City)

It’s swept the board at the New York Film Critics awards and there’s heavy Oscar talk for both Cate Blanchett and Roony Mara in this 1950s period drama with Mara as a Manhattan department store clerk who becomes involved in a lesbian love affair with Banchett’s older, well to do New Yorker trapped in a loveless marriage with custody of her daughter at stake. (Cineworld 5 Ways, NEC, Solihull; Electric; Empire Great Park, Sutton Coldfield; Everyman; MAC; Vue Star City)

Christmas With The Coopers (12A)

A star-studded seasonal multiple storyline romcom a la Love Actually as a dysnfunctional family gather for Christmas Eve dinner, all of them hiding guilty secrets and in various states of emotional crisis. Cliched and ultimately sentimental, but there’s good turns from Diane Keaton as the wife who’s lost touch with herself and her marriage and Olivia Wilde as her daughter who, cynical about the permanence of love, enlists a good old boy soldier to pose as her boyfriend for the evening to as to avoid her parent’s judgmental sympathy. (Cineworld 5 Ways, NEC, Solihull; Empire Great Park, Sutton Coldfield; Everyman; Odeon Birmingham, Broadway Plaza; Showcase Walsall; Vue Redditch, Star City)

Gone With The Wind (PG)

Set in a sort of vague Prehistoric Wild West, Pixar’s latest animation skews young and low on plot in a variation of the boy and his dog chestnut, the difference being that the boy is a dinosaur trying to find his way home and the dog is the feral young human with whom he forges a bond. (Cineworld 5 Ways, NEC, Solihull; Empire Great Park, Sutton Coldfield; Odeon Birmingham, Broadway Plaza, West Brom; Reel; Showcase Walsall; Vue Redditch, Star City)

Animated sequel finds hotel owner Dracula (Adam Sandler) concerned that his grandson might be human like his father, Johnny(Adam Samberg), rather that his mom, Mavis (Selena Gomez) and, while the kids parents are off scouting California for property, enlists his fellow monsters to try and get the boy to sprout fangs by taking him to vampire summer camp. It’s packed with visual gags, one-liners and quickie sketches as well as a message about what constitutes ‘normal’ and being open-minded (Cineworld 5 Ways;  Empire Great Park; Reel; Vue Redditch, Star City)

The Hunger Games: Mockingjay Part 2 (12A)

It’s A Wonderful Life (U)

The seasonal evergreen returns with James Stewart finding what life would have been life had he never been born. (Mon 14: Everyman)

Offering an antidote to the usual Christmas schmaltz, directed and co-written by Michael Dougherty, this dark horror-fantasy balances fear and fun in equally effective measure.  Young Max (Emjay Anthony) wants to hang on to belief in Santa and for Christmas could be like it used to be, when everyone was nice to one another and the spirit of giving ruled rather than, as in the title sequence, battling each other for department store bargains. It’s bad enough that dad (Adam Scott), mom (Toni Collette) and sister (Stefania LaVie Owen) struggle to get along, but his when crass aunt Linda (Allison Tolman), her redneck husband (David Koechner), their obnoxious neanderthal kids and mom’s mean-spirited aunt Dorothy arrive for the holidays and his macho twin female cousins mock his letter to Santa wish, he tears it up and throws it out the window.

Next thing you know, the power’s out, the neighbours have all vanished, town’s in the grip of a major freeze, sinister snowmen are in the drive and there’s something decidedly unpleasant outside. It is, according to an inventive animated flashback from Max’s German grannie, the anti-Santa, Krampus, a hulking, horned demon that comes to punish those who lose the festive spirit. Soon, family members are being whisked away and everyone’s under siege and battling a nightmarish clown, killer stuffed cuddlies, elves and (most gleeful of all) malevolent gingerbread men cookies. Clearly inspired by Gremlins abut borrowing equally from Home Alone, Poltergeist, Evil Dead and Scream, with its freaky monsters and dark set design this both looks fantastic and features solid performances, its acerbic bite deftly undermining the ostensibly sentimental message and delivering a subversive final kick in the sleigh bells too. (Cineworld 5 Ways, NEC, Solihull;  Empire Great Park; Odeon Birmingham, Broadway Plaza; Showcase Walsall; Vue Redditch, Star City)

A well constructed, often amusing but ultimately flag waving hymn to American can do as, left behind on Mars, Matt Damon gets into full on survivalist mode while NASA try and work out how they can rescue him before his food runs out. (Vue Star City)

Stoner New York lifelong buddies, each with their own insecurity, Seth Rogen, Joseph Gordon-Levitt and Anthony Mackie set out on Christmas Eve to find the ultimate party for one final blow out before surrendering to growing up. There’s some sweetness and poignancy here, but it’s mostly buried under a mountain of debauchery, dope, vomit and dick jokes. (Empire Great Park; Reel; Vue Star City)

Set around three presentations, Danny Boyle’s biopic of how, from fall from Apple grace to rise to Apple and iMac triumph, Jobs became the heart of the digital revolution. Essentially a film of people talking, it is compelling viewing with Michael Fassbender on towering form as the driven and often cold and ruthless Jobs, his relationship with the girl he refused to acknowledge as his daughter especially prickly, with an excdellent Kate Winslet is almost unrecognisable as his right hand woman Joanna Hoffman. The final scene between Fassbender and Jeff Daniels as John Scully, the former Apple CEO who was responsible for him being fired, is masterclass cinema. (Odeon Broadway Plaza)

Bleak but inspirational tribute to the women in England who, in the early years of the twentieth century, crusaded for reform and the vote, embodied here in east London laundry worker Carey Mulligan. Radicalised by fellow worker Ann-Marie Duff and bomb-making pharmacist Helena Bonham-Carter, she  joins the movement for change spearheaded by Meryl Streep’s Emmeline Pankhurst, inevitably leading to friction in her marriage to consvervative Ben Wishaw and oppression by the authorities, personified by Brendan Gleeson’s police inspector. (Everyman; Vue Redditch)

A taxi driver is driving through the vibrant streets of Tehran. Diverse passengers enter the taxi, each candidly expressing their views while being interviewed by the driver who is no one else but the director Jafar Panahi himself. His camera placed on the dashboard of his car, transforming de facto his car into a mobile film studio, captures the spirit and contradictions of Iranian society through this comedic and dramatic drive. (Mon 14: Everyman)

A BFI revival of the 1990 adaptation of Philip K Dick’s sci fi thriller with Arnie as the guy who buys a holiday memory implant only to start remembering himself as a secret agent fighting the bad guys on Mars. Famous for Arnie’s “consider this a divorce” line to Sharon Stone. (Sat 12:Everyman)

Another BFI revival, this time Tony Scott’s Tarantino-penned 1993  crime-thriller-romance with Christian Slater who unwisely shoots his hooker wife’s pimp(Gary Oldman), steaks his coke tries to offload it in Hollywood while gangter Cjristopher Walken sets out to get it back. (Mon 14: MAC)