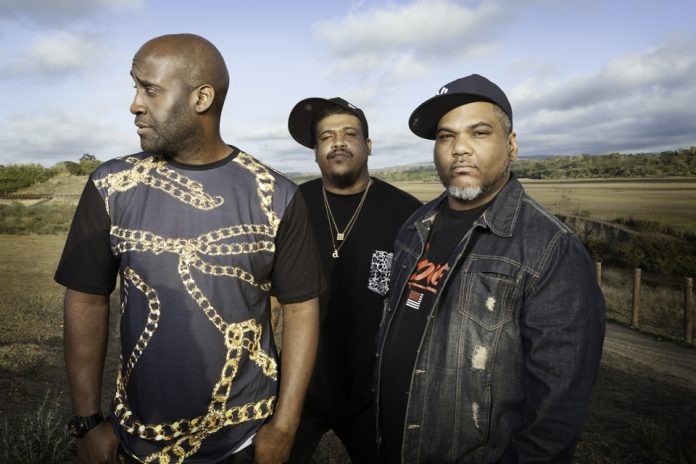 Emerging at a time of strong posturing and aggressive beats, Mostly Jazz Funk and Soul headliner De La Soul’s more thoughtful and (dare we say it) softer approach signalled a new era for hip hop. Their 1989 debut, 3 Feet High And Rising, earned them a cross-over hit and is now considered a classic, while their sophomore, De La Soul Is Dead, proved they could do ‘dark’ just as well as ‘light’.

While many of their peers have slipped from view, Pos, Dave and Maseo have continued, collaborating with such acts as MF Doom, Ghostface Killah, Flavor Flav and (perhaps most famously) Damon Albarn’s Gorillaz.

Now, a full 30 years since they started (in Long Island, New York), the trio are set to release And the Anonymous Nobody (out August 2016), featuring an eclectic range of guests.

But before discussing details of the album, Pos (aka Kelvin Mercer) takes a brief look back…

Stetsasonic’s release party at a venue called Hotel Amazon. We were nervous but pushed through the performance. Gods like DMA and Jam Master Jay were in the crowd, as well as Russell Simmons – who came up to us afterwards and wanted to sign us for management and eventually became our manager. After we got off stage (we only performed our first single at the time, Plug Tunnin) DMC was like “Yo! That was the shit … go back on a perform again!”

For an album with ‘Anonymous’ in the title, you’ve been working with some big names, including Snoop Dogg, Jill Scott, Little Dragon, even Justin Hawkins (from The Darkness). How did you come to work with some of those guys? Did you have tracks in mind for certain people, or just build something up in the studio from scratch with them?

We had no idea who to work with until the songs themselves were forming which then allowed us to hear a certain voice/ person on the track. The smooth funkiness of Pain sounded like something Snoop would be on, so we thought this would be perfect for him to be on. We had ran into Snoop a year before at SXSW and he made mention of how we had never worked together, so we came calling for him with the song Pain, and was happy .. he picked up the phone and accepted.

… and Usher’s on Greyhounds …

Greyhounds was an amazing record from the very beginning. The music, concept and rhymes came together pretty quickly, but the chorus and who would sing it eluded us for a very long time. Dave was into an artist named King Krule out of the UK, and he felt his voice would be a great addition, but connecting with him had eluded us as well. From that point we were stuck in this vision of a voice from the UK, so thoughts of handing it over to Damon (Albarn) came to mind. Meanwhile, the musicians we were working with were taking a stab at it by getting singer/ songwriters to try and nail something for whoever we would eventually find. One of the writers they brought to the table not only nailed it, but helped us to view the feel of the song in a whole different way. We finally heard the song with an R&B feel with this new chorus, which allowed us to add even more elements to the production of the record to keep it grounded in the rhythm with a great reach vocally. The song writer’s voice favoured some of the movement of Usher’s, so ‘ding’ … lightbulb went off, and we reached out to Usher.

David Byrne was a complete honour to work with. The way the collaboration came about was we were listening to a bunch of tracks we had already recorded and were trying to narrow down what we felt would definitely be used, and what wouldn’t – due to us not liking the music or realising it just didn’t fit within the realm of writing a rhyme to it. There was this one track that the band had put a lot of work into, but we just didn’t see or, better yet, hear how we could fit on it – so it made the list of songs that would be placed to the side. I made a comment that the song sounded like something Talking Heads would be on, and once again the light bulb went off, and we decided to reach out to David Byrne. Supa Dave West, who worked with us on the album as well as playing drums on the jam sessions for the album, had put together some beats the day before, and one of those beats he worked on matched the tone of this possible David Byrne collab’ … so I combine the two songs together so that Mr Byrne could sing on the song put together with band, and we could rap over the beat put together by Supa Dave West.

Damon Albarn is also on the album, who you’ve been working with for a decade now. How did you first meet?

We had mutual friends. He reached out to us through them to find out if we would be open to collaborating on the Demon Dayz album [Gorillaz album, released in 2005]. We of course said yes, and met up with him and shared a few great days of creating and enjoying each other’s company. He is true artist!

What’s your personal favourite tracks and why?

A lot to name, but I will say Drawn featuring Little Dragon. The song just pushes past anything we’ve done before, and there is so much beauty found in the song. It feels very cinematic! Greyhounds featuring Usher is another great one. The stretched sadness of the keys connects with subtleness in our voices telling the story.

You funded the album via KickStarter – going way beyond your initial ask. Did the scale of the success take you by surprise?

Very much so. What we asked for we received in a few hours, and by the end of the campaign we came close to a million dollars. We were confident that we would reach our goal, but were very surprised in how quickly we reached the goal, and more!

This feels like the first album you’ve released where you’re 100% in control of everything – how has that experience been? Exciting? Daunting? Inspiring?

It’s been a lot of work and well worth it. The process is still ongoing. We were always hands on and stood side-by-side in many areas of our project with the label we were on, but to actually be the one totally in charge of every move is an eye opener. There is no label to call us and keep us on track when we want to disappear and be creative…. If we disappear we are solely accountable for those actions which could hurt our project.