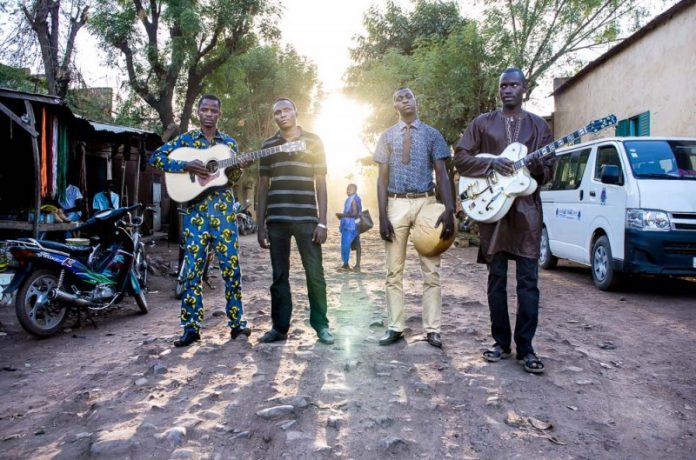 Mali has never been short of musical talent, from Salif Keita and Ali Farka Touré, to Tinariwen and Amadou and Mariam. The latest in that impressive line of musical exports is Songhoy Blues.

The core of the band came together at university, though it was arguably the growing violent conflict within Mali – a complex power struggle which saw the imposition of Islamist law in Timbuktu and intervention by French military forces – which gave Songhoy Blues their impetus, their voice.

“We met up (in Bamako), and told ourselves we couldn’t just stay shipwrecked by a crisis like this. We had to form a band,” remembers guitarist Garba Toure.

Displaced, the quartet cut their teeth playing five-hour sets on Bamako’s club circuit where they came to the attention of Africa Express in 2013 – the group of US and European music-makers whose number included The Yeah Yeah Yeah’s Nick Zinner and the prolific Damon Albarn, with Zinner later helping shape Songhoy Blues’ acclaimed debut album, Music In Exile.

Unsurprisingly, the band confesses they had never heard of either Zinner or Albarn until they met.

“But for us I think that made working with them much better,” says bassist Oumar Toure. “We weren’t blinded or intimidated by their reputations which allowed us to just approach working together as though we were on the same level, as colleagues and mentors where our opinions were as important as theirs and their contributions were taken on how great their ideas were rather than because of who they were.

“It was a very open process.”

Since releasing the Music In Exile in late 2015, the four piece – Oumar, Garba, drummer Nathanial ‘Nat’ Dembele and frontman Aliou Toure – have found themselves thrust into the international limelight. Touring the world, there have been, naturally, plenty of highlights.

“We came to London for the launch of the Africa Express record Maison Des Jeunes which we were featured on, and to find such a warm welcome was a big turning point for us.

“That was the moment we realised that we were making music that could connect with a wider audience outside of Mali which was something we’d never really considered before.

“After that everything has been a whirlwind and there’s been so many highlights but our headline at Roundhouse in London in May has to be a big one. To play in front of three thousand people who knew our music and even sang along in places, was something we could never have imagined when this project first started.”

The band’s infectious brand of ‘desert blues’ has entranced critics, who’ve cited Farka Touré, Jimi Hendrix and Talking Heads (circa Remain In Light) as reference points. Songhoy Blues have since gone on to cover tracks by Led Zep’ (Kashmir) and The Clash (Should I Stay Or Should I Go), demonstrating their widening influences and paving the way for a second long-player.

“We’ve already started demoing some songs and talking to potential producers, but the work really starts from September,” Oumar reports. “We’re planning to head back to Mali, take stock of the last two years and then dive into recording the next album in Bamako.”

However, despite the intervention of French forces driving the Jihadi’s into hiding, the situation in Mali remains tense, means there’ll be few shows in their home country.

“There are still attacks, danger, fear,” says Oumar. “We’d love to play more in Mali, especially where we’re from in the North, but sadly that’s just not possible right now.”