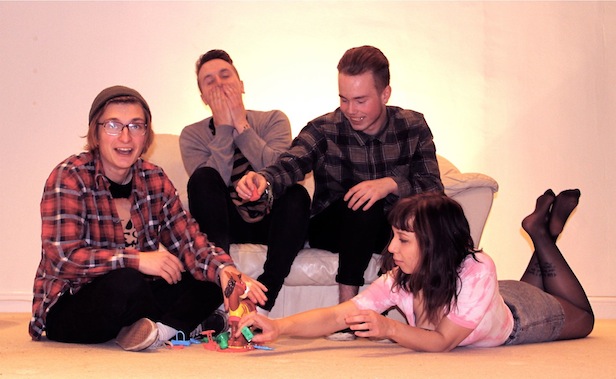 In the hot and sweaty basement of TALK, one of Birmingham’s most exciting new bands Garden (formed from a selection of talent of Birmingham bands; Wide Eyed’s Aaron Singh, Bad Moon’s Jordan Crawford and Heavy Waves’ Luke Morgan), take to the stage to deliver only their second live performance, though their energy and Crawford’s power as a frontman give the impression that they’ve been blowing minds (and ear drums) with their doo- laden tunes for years already. Without warning the band launch into their first song and as one bleeds into another under a sea of sound Garden do not let up for even a second. As Crawford announces a song about “a disabled snake,” the crowd pick up in anticipation for Garden’s only online offering, Blind Viper. Blasting through a set of spiralling guitar riffs, bone-rattling bass and the kind of drumming that gives you neck pain, Garden show that they’re here to make noise and leave you shell-shocked. Look out for their self-titled release set for release soon.

With the room still charged from Garden’s performance it’s time for Bristol punk outfit Milk Teeth to take to the stage to deliver a largely instrumental set, not intentionally but due to technical difficulties. Unperturbed, or perhaps just unaware, they rip through their frantic punk repertoire to an appreciative, albeit disappointingly small, audience. Recent single Vitamins provokes the crowd into action as the unmistakable guitar riff kicks in, their new song Bagels showing bags of potential and the solid evidence that this band aren’t running out of steam anytime soon. The mood settles down a bit for Swear Jar, a slight departure from the break neck speed that tends to define most of their catalogue and drawing far more influence from grunge, but it doesn’t seem out of place in the set – despite the slowed down pace, the energy remains. As the band wind down it’s clear that while they may not be re-inventing the wheel with their music, they also aren’t simply aping the sounds of the greats. It’s music that’s familiar to most punk fans but it’s not boring either – there aren’t many bands can take an age-old formula and make it sound this fresh again. Milk Teeth do it well.