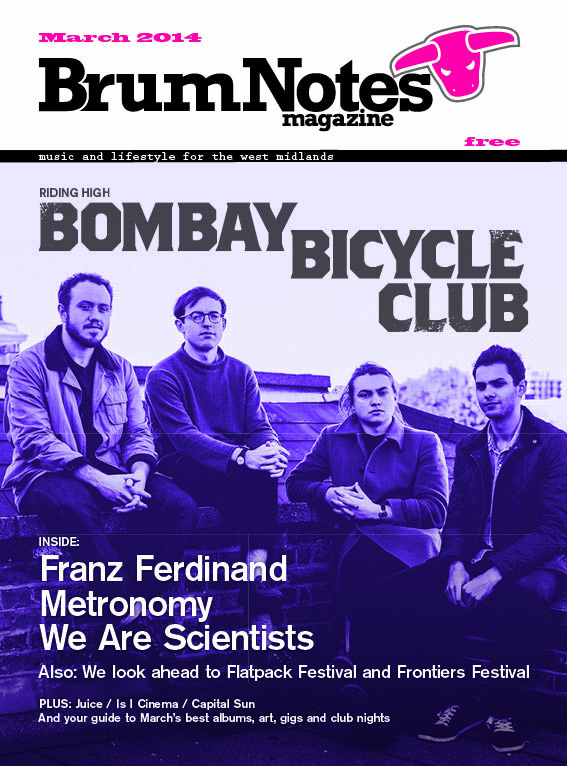 Spring is apparently around the corner and the days are getting longer. But even better news, there’s a brand new Brum Notes Magazine out now. The March 2014 edition is hitting the streets of Birmingham and beyond and you can read it online here.

Newly crowned kings of indie pop Bombay Bicycle Club adorn the cover in the wake of their first ever number one album. We catch up with frontman Jack Steadman about their rise and rise.

Also inside this month, we talk to Scottish art-rock icons Franz Ferdinand, sharp tongued rockers We Are Scientists and electro adventurers Metronomy.

We also guide you through the best of March’s always-intriguing Flatpack Festival and introduce you to a brand new showcase of New York’s most exciting avant-garde musicians in the shape of Frontiers Festival.

There’s plenty more to feast your eyes upon too, including reviews of the month’s best albums, and we give you our tips on the best music, arts and club nights to take in throughout March.

Pick up your free edition of Brum Notes Magazine from your favourite hotspots in the West Midlands, or read it online now.

Plus, celebrate the new issue in noisy style at the March Issue Launch Party on Thursday, March 6, at the Bull’s Head, Moseley. Is I Cinema headline, with live sets also from Victor and Women, plus Ghosts of Dead Airplanes on DJ duty, all for just £3 on the door. More deets here.