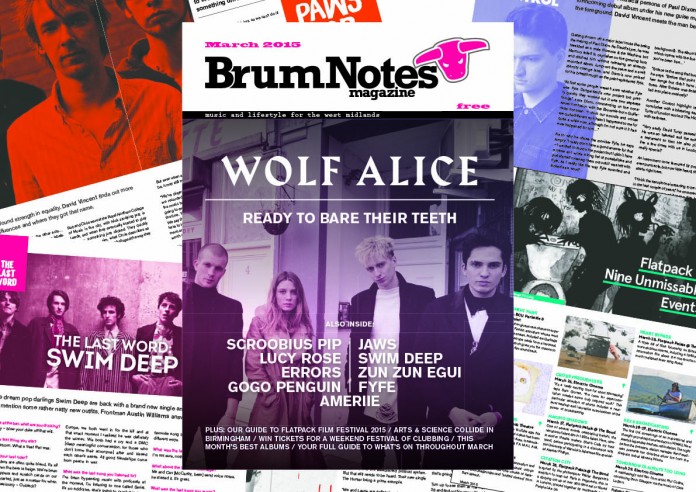 Wolf Alice adorn the cover of the brand new March 2015 edition of Brum Notes Magazine, which is now winging its way across the West Midlands.

We catch up with the London outfit’s singer Ellie Rowsell to talk debut albums, Birmingham bands and life on the road.

Also this month, we speak to multi-talented rapper, poet, DJ, podcaster and all round boss man Scroobius Pip as he brings his own club night to Brum, while Warwickshire singer Lucy Rose takes a break from dog-walking to talk about her return to headline touring. 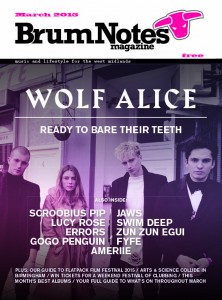 Local heroes Jaws tell us about their favourite new bands, while we catch up with Swim Deep ahead of their homecoming return to the stage.

Birmingham is absolutely brimming with cultural treats in March, so we’ve got a full preview of Flatpack Film Festival, plus a look at a unique collaboration of music and science heading to a landmark tower in the city.

You’ll also find reviews of the best new albums that you should be listening to, as well as our tips on what gigs, club nights and events to check out across Birmingham and beyond in March.

And that’s just a taste of what’s inside, so pick up your copy from your favourite haunt across the West Midlands or read the latest issue of Brum Notes Magazine online here.