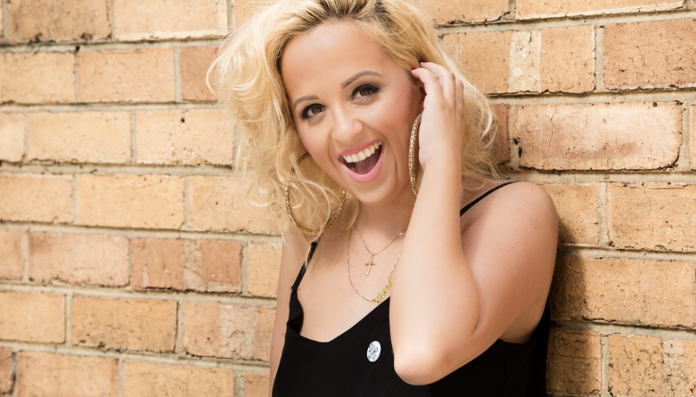 She’s travelled the world and her online videos have been watched over 30 million times, and it’s all thanks to Beyoncé. Kind of.

Single and heartbroken, with a career “going nowhere,” Birmingham-born comedienne Luisa Omielan found herself jokingly pondering what the similarly aged US R’n’B/ pop super-superstar would do in her position. The resulting 2012 one-woman show, entitled What Would Beyoncé Do?!, became one of the most successful Edinburgh Fringe Festival debuts in recent years.

Acclaimed for its frankness, especially in tackling the topic of body image, Luisa’s spot-on ‘thigh gap’ routine racked up five million views in two days after a filmed leggings-dropping appearance on stage in Melbourne.

“It was a breakthrough show for me and such magic … I loved performing that show, it got me into comedy full-time, I could move out of my mums, pursue this [stand-up] game and travel around the world,” she says, adding that the show is in the process of being turned into a book, to be published by Penguin Random House in 2016.

“I didn’t think I would enjoy writing a book but it’s actually been quite fun and therapeutic. It’s difficult because you don’t have immediate audience feedback [like you would with live stand-up comedy], so in a way it’s a good excuse to just get lost in whatever you want to talk about!

“It’s all about things from the show, and a story of how I found myself approaching 30 and things weren’t going the way I had thought they would. It’s basically a list of all the things Beyoncé wouldn’t do. It’ll be published in July.”

Her latest show is Am I Right Ladies?!, which sees her continuing to explore similar themes, including “…body image, mental health, sex and society’s pressure, and lack of love for ourselves as individuals.”

Much of her audience, so far at least, is predominantly female – something she’s understandably proud of – though men are most certainly welcome.

“It’s great to have such a female heavy audience, I guess they can identify. I am not anti-men at all and invite them to come, I think they get to safely see an insight and can see themselves in the material I talk about. I would love more men to come my show, but I will always put my bitches first!”