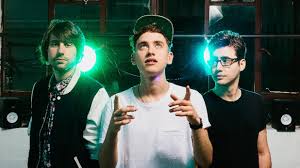 With high-pitched squeals accompanying their ascension to the stage, the shrieking fanfare of Years & Years’ rabid female following fails to extinguish as the newly-anointed BBC Sound of 2015 winners ignite their first ever headline tour with an upbeat opening trio of unquestionable floor-fillers. An on-point performance treated by the electro-happy foursome as a frenzied sort of victory lap, vested singer Olly Alexander remains caught in the glare of a sea of camera phones until sparse first song Foundation dwindles to its end point, keeping a bounce in his step reserved for the back-to-back pairing of spiralling twin assault Take Shelter and Desire. Visibly driven on by the fevered, lung-puncturing accompaniment of his admirers, the frontman writhes and wriggles as his pleading vocals switch pitch to meet Real’s euphoric peak, cheekily addressing individual fans as the track starts to fade to further fan the flames of the night’s hysteria.

But Years & Years have much more in their locker than processed beats and a pretty face. Using the tour to debut a batch of previously unheard songs – most of which float into gentler, more reserved territory – the high point of this fresh material appears when Alexander assumes the piano for the affectionate, after-dark balladry of Ready For You. Though not as immediate as their synthpop juggernauts, an assessment that the restless crowd’s idle chit-chat seems to agree on, it’s a welcome change of pace that reveals another nuance to the emerging, now number one-scoring outfit.

To end, the gloopy flourish of said chart-topper King signs the occasion with an ecstatic footnote, the band, not least Alexander – hands pressed against his face and fighting back the tears – overwhelmed by The Institute’s riotous response. Bigger things beckon for these boys.