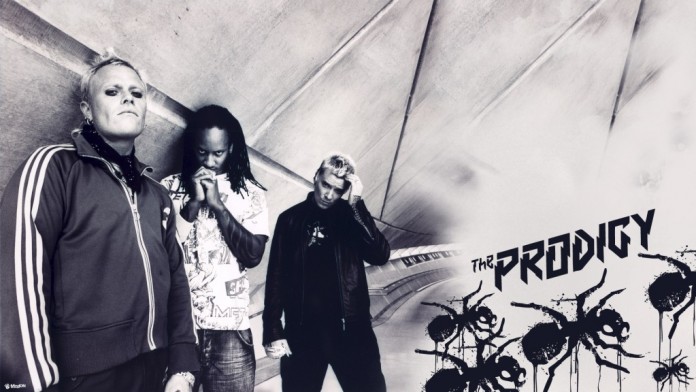 By the time The Prodigy walk on stage the venue is a hot house of anticipation, it’s no surprise that after opening salvo Breathe, MC Maxim sheds his fur-lined coat, whipping the crowd into an immediate frenzy. With a backdrop of blue lights akin to neon flycatchers flickering in a deserted warehouse, Maxim, intensely bug-eyed, addresses the crowd as “warriors” and “my people” before Nasty is shot out like venom from their latest album The Day Is My Enemy. The intro of Wild Frontier, another new one, offers a brief respite from the relentless bombardment before the depth charge bass drops and the place goes off again, all lured in by a synth line that harks back to the era of the Jilted Generation album.

As Liam Howlett holds court behind his bank of keyboards, Keith Flint prowls the stage like an unhinged guard dog, until the opening wail of Firestarter summons him to the front. His pyromania-inspired growls under tufts of spiked hair are as convincing and deranged as ever. The Day Is My Enemy title track has an energy that proves that even after 23 years they’re still the best dance-punks around. Voodoo People is given a teasing start with the tempo brought down to a near-dub level before the shrill flute pre-empts the madness that takes hold.

One of the standout tracks of the night, Wall of Death, is an onslaught of beats, guitar and lights that combine to pummel the crowd into wilful submission. Medicine’s snake-charming intro entrances the crowd for a few short seconds before the merciless bass drop gets the room moving again. Smack My Bitch Up ends the main set in a typically berserk fashion, before Maxim orchestrates a human whirlpool for Their Law. On the evening of the general election, where people are electing their leaders, this track is particularly resonant. The Prodigy are as good as ever, it’s unanimous, and they’re still totally living by their own set of laws.