Have you ever walked into a venue to see an instrument made of bike wheels, levers and a snare accompanied by a horn-based microphone on an adjacent stand? Thomas Truax‘s inventions and musical instruments are spectacles in their own right.

Truax refers to his accompanying instruments like looping pal bandmates ; ‘The Hornicator’ and ‘Mother Superior’ hold down some mechanical beats which Truax layers with guitar to hint at a punk / rockabilly sound. It’s experimental but it manages to retain its heritage – it is a performance like no other as he picks up another of his instruments. Then, all of a sudden, he’s unplugged, singing and playing guitar on a table in the middle of the bar and surrounding corridors in pure style.

Bob Log III hits the ground running, wasting no time in turning the evening up another gear. He admits that he can see basically nothing through the helmet. Lo-fi slide riffs and heart-felt drum hits catch everyone’s attention, as does his jumpsuit with five pence pieces glued like tassels down his sides. Later he’ll sing his praises for their adhesive, although he’s really just chuffed that none of them have fallen off.

For a primarily seated performer, Bob has so much energy, moving as much as his riffs and getting lost in the midst of the sound that he smashes out fast. At regular intervals he needs to ask the audience “How many songs was that, 92? Felt like it”. It’s a great performance and everybody gets involved, some get balloons, some get personalised shout outs and some dude even gets to sit on Bob’s lap for a song, although he did say afterwards that happens a lot more often than it should… 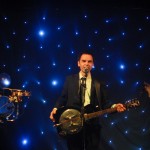 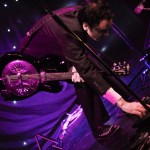 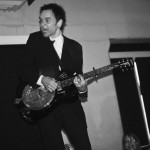 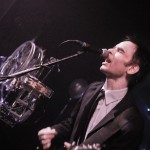 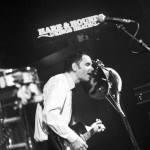 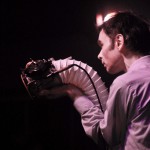 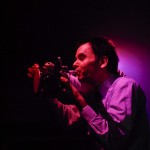 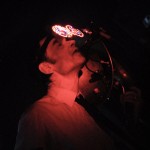 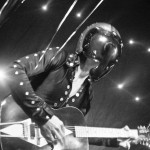 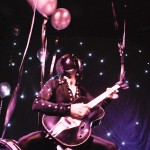 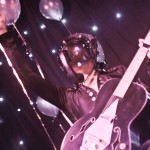 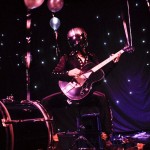 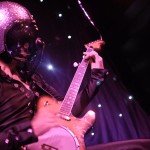 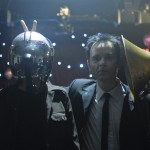