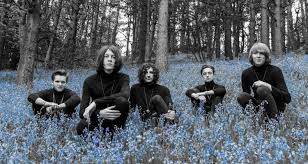 With the foppish curls that sit atop his skeletal frame preened to perfection, Blossoms frontman Tom Ogden would surely be hot favourite to scoop the top prize at a Mick Jagger look-alike contest. Fortunately though, Stones impressions aren’t the only thing that this fledgling Stockport-based five-piece look like they’re starting to master. Rolling out a natty line of dreamy, opalescent pastel-pop ditties across a set that doesn’t scrimp on the swagger, the quintet’s inaugural Birmingham headline slot fervently demonstrates that they’ve got the psych chops to freak it out with the best of them.

Played out over a sickly-sweet union of rich Al Kooper-like organ and shimmering guitars, the giddy rush of opener You Pulled A Gun On Me gives the night’s first glimpse of the lysergic promise that forced Coral frontman James Skelly to court the band, eventually deeming them worthy of a release on his own record label.

Taken under the wing of a man who knows his Byrds from his Beatles, Ogden and company’s sub-40 minute set proves a cocksure Mancunian answer to Temples’ shrill retro call. Bolstered by swathes of Northern bravado, the band’s leather-jacketed leader sucks nonchalantly on a Stella bottle as The Urge’s acid-kissed fuzz sweeps through the air, almost drawing blood from his hands in providing the rambunctious Baggy groove of Cut Me And I’ll Bleed with flashes of Liam Gallagher-esque tambourine.

Dialling down the pomp for dusty campfire warble My Favourite Room- a live staple sung back by a growing mass of adoring fans assembled at the barricade- the latter half of their set reveals a defter, more subdued string to their bow.