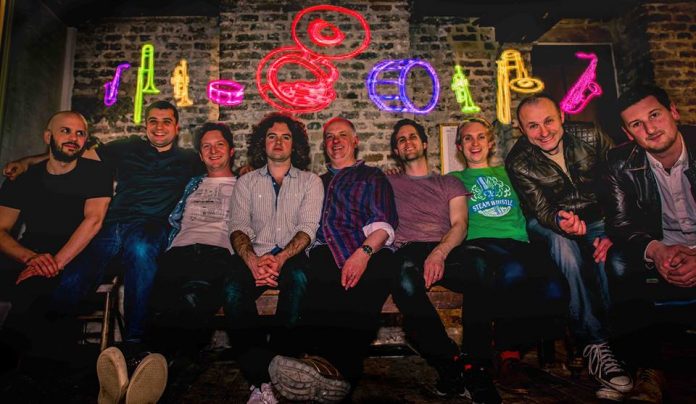 On a weekend of fanfares and royal celebrations it is fitting that the members of the Hackney Colliery Band are heralded to the stage in a military style fervour of snare and bass drum, filling the air with the brazen sounds of Jump Then Run, before cutting it fast and loose with the 70s soul and frisky jazz of When You Know. With the threat of imminent rain hanging over the mac’s amphitheatre the band are forced to seek shelter further back on the stage, creating a much larger than preferred gap between them and the audience. Despite the gap (which is gently populated by the brave and undeterred), the full swell of sound produced by the volley of trumpets, trombones, saxophones, drums and sousaphone (think portable tuba) is soon amplified throughout the space.

Playing a mix of covers and their own music taken from forthcoming album Sharpener and previous release Common Decency, the band demonstrate a versatility mixed with a fresh DIY collective attitude. With no label or management, what you see is what you get. The frills make way for fast-paced trills and a freedom of movement that has them hurtle through a spectrum of styles.

A rendition of Kwab’s Wrong or Right is given a brassy soul whilst the Pink Floyd style sonic of Reawake creates an ambience from which Emma Bassett’s hypnotic trombone emerges like light through haze. The track, taken from their forthcoming album, adopts a reggae groove before collapsing into the crazed jazz of 3 Trapped Tigers’ Cramm. As a contrast, Nirvana’s Heart Shaped Box is a straight up rendition and is instantly recognisable. Bread and Circuses, a song born out of politics, combines skittering electro beats with psych brass, which sends it off in a Marvin Gaye Trouble Man direction and the interval, as welcoming patches of blue form in the sky.

A version of Kanye West’s All The Lights gets the second half off to a blistering start, enticing people to venture into the circle to dance, the threat of rain having seemingly dissipated away. And this is how it continues for the next hour – energetic, ballsy, humorous and euphoric, interspersed with an unexpected rap, the sound of the sousaphone momentarily transformed into a didgeridoo, drum breaks and sax licks galore, a Balkan breakout that gets everyone swinging and a slick cover of Blackstreet’s No Diggity poured on top. The final flurry is a Prodigy medley that solders Jericho, Out Of Space and No Good into a glorious fanfare of electro punk meets brass before they leave the stage, processing out through the crowd, with Toto’s Africa wafting in the air.