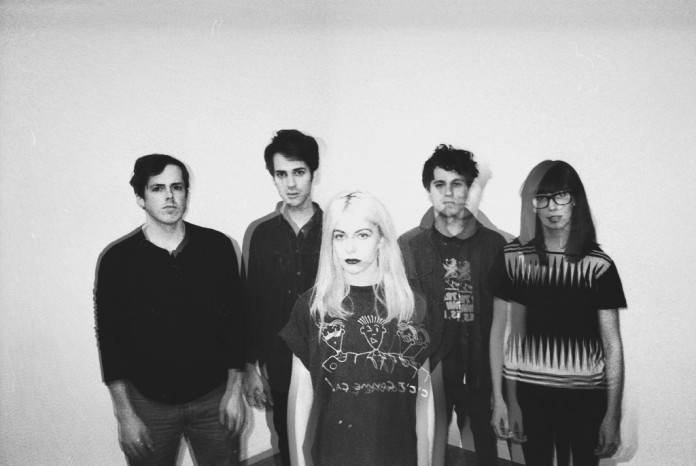 Taken over by two of Canada’s most promising young bands, tonight the Hare & Hounds bursts with a sold-out crowd hungry to sample the fruits of the North American nation’s thriving music scene.

First up are Toronto’s Moon King– childhood friends Maddy Wilde and Daniel Woodhead- who keep it just the right side of loose to impress on the grungy roar of opener Impossible. Unfortunately struck down by a technical hitch shortly after, Woodhead brandishes his now-unplayable guitar like a weapon for the remainder of the duo’s storming performance- the set ending on a high with the droning Krautrock of new single Roswell, powered by Wilde’s fierce strumming, instigating a sweaty climax that mixes flailing hair and zealous head-banging.

Matched with singer Molly Rankin’s enthusiasm and charm, Alvvays’ well-crafted surf rock tunes give the crowd exactly what they came for. Hailing from the “small island of Nova Scotia”, the five-piece focus on playing songs from their highly-rated 2014 self-titled debut album, making for a set that mines a similarly kaleidoscopic sound to that of fellow jangle-pop enthusiasts The Drums. Your Type and Next of Kin get things started before Rankin turns to the crowd to wax lyrical about her band’s three previous visits to Birmingham, spinning tales that involve genial landlords, sour apple shots and grooving to Sheryl Crow on the jukebox. Her gushing claim that these were by far the best nights of each tour is met by guitarist Alec O’Hanley’s gleeful shout of “let’s make it four!”

A rush of excitement ushers in Archie, Marry Me- a catchy sure-fire anthem in waiting- whilst a cover of Deerhunter’s Nosebleed has more than a sniff of The Buzzcocks to it, bouncing along on a new-wave chug. Alvvays’ heart may be found in the mid-paced dalliance of tunes like The Agency Group and Dives, adorned by Kerri MacLellan’s keys, but it’s in the more energetic tracks (the Blondie-with-pigtails Atop A Cake and the chiming Adult Diversion) that they really come into their own. A cover of The Primitives’ Out of Reach and new track Haircut serve as an encore, proving that they are a band that know where they have come from and, more importantly, where they are heading.