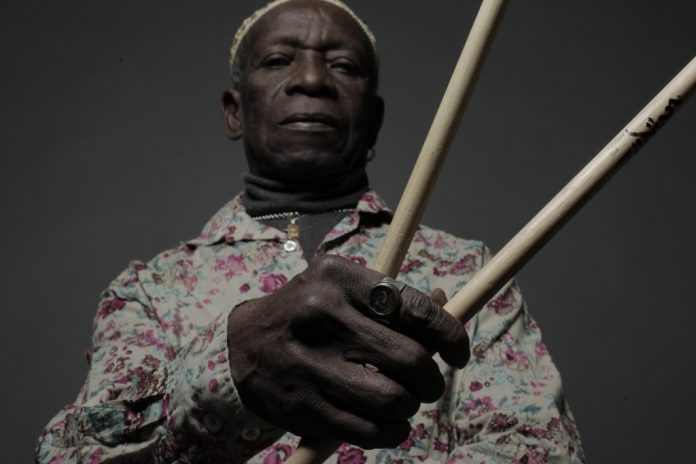 Described by Brian Eno as “perhaps the greatest drummer who has ever lived”, the legendary Tony Allen returns to his jazz roots for a very special performance at Coventry’s Warwick Arts Centre (8 Feb 2018).

One of the founding fathers of Afrobeat, Allen’s drumming style has influenced generations of musicians over the past 50 years.

Born in Nigeria, he was an original member of Fela Kuti’s Africa 70 and the inventor of the distinctive Afrobeat drum rhythm.

His creative collaboration with Albarn began when the singer namechecked Allen on Blur’s 2000 single Music Is My Radar. Since then, Albarn has worked on several of Allen’s albums (including 2017’s The Source), while Allen was a core member of Albarn’s ‘supergroups’ The Good, The Bad and The Queen (with members of The Verve and The Clash), and Rocket Juice and The Moon (with Red Hot Chili Peppers’ Flea).

Now signed to Blue Note (arguably the greatest jazz label of all time), Allen has followed his four-track A Tribute to Art Blakey and the Jazz Messengers EP with The Source – a set of original instrumentals co-written with saxophonist Yann Jankielewicz and inspired by Allen’s early jazz influences (Lester Bowie, Charles Mingus, Art Blakey, Gil Evans).