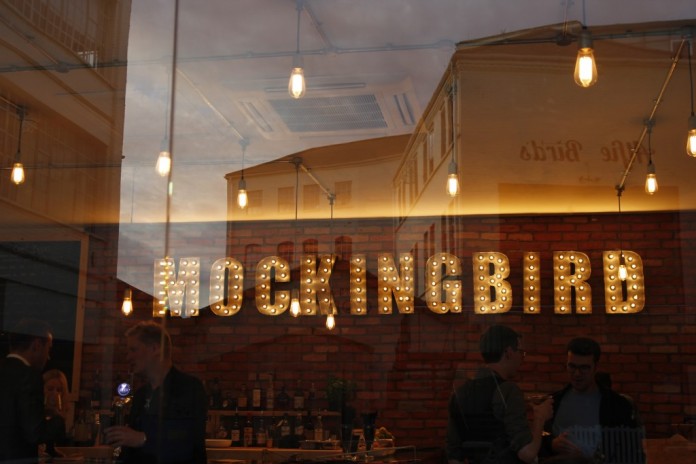 Custard Factory flaneurs will know that every Digbeth enterprise worth its salt has seen the involvement, in some capacity, of a man named Dave – photographer of famous t-shirts, omnipresent handyman and general good egg.

For his part in the makeover of the Mockingbird – the new project from Craig Essex and Anthony Duffy of Big Papa’s Beautiful South – Dave is fully deserving of this special mention. The Mockingbird Theatre has been transformed, with warm brick and beachy reclaimed wood blending seamlessly through floor to ceiling windows into its serene corner of the Custard Factory.

The effect of all these warehouse textures is not the haughty abrasiveness that sometimes comes with spending a lot of money on making something look industrial, but instead a warm, relaxing and uninhibited space. Art is given plenty of breathing room on gentle white walls and ‘MOCKINGBIRD’ glows in cute lights from behind the bar, giving a kind of fantasy New York coffeeshop effect (you know, the one that would only exist in neighbourhoods nicer and cooler than yours).

In the Custard Factory, none of this matters without a lunch deal that competes successfully with Yumm, or a bar with The Old Crown or Alfie Bird’s, or foody-ness with Digbeth Dining Club. There have been casualties. 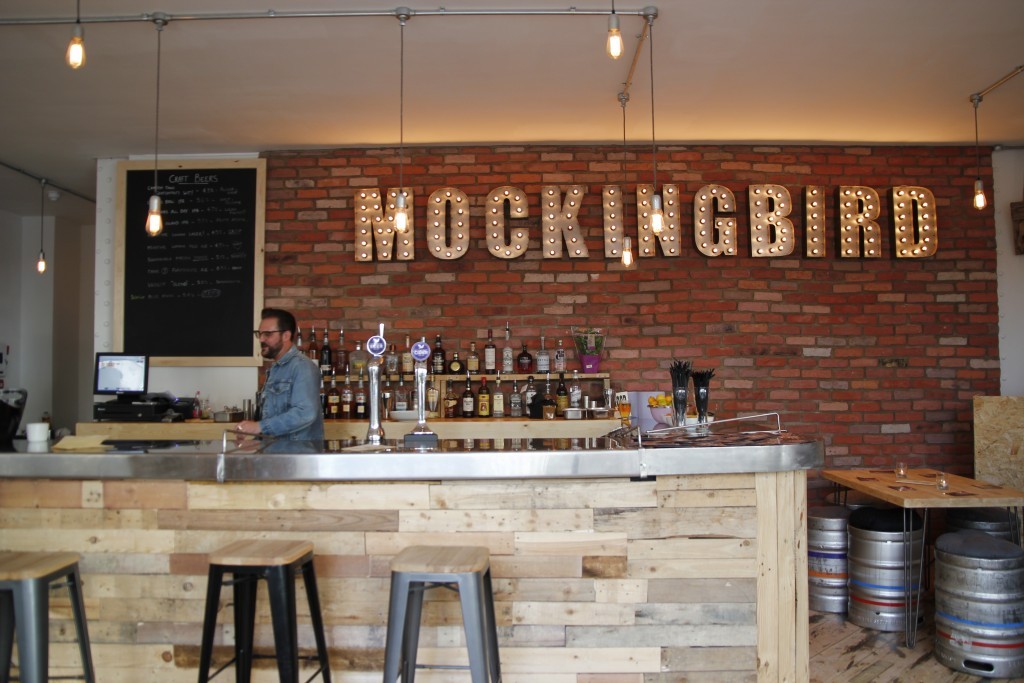 Aware of this, the duo have set out to compete on taste and efficiency: a bit pricier than Yumm, yes, but equally viable in the working day and substantially foodier and chefier. I have absolutely no idea what it means to go for the ‘bistro’ thing, but if it means locally sourced (these boys know the joys of the Bullring markets), seasonal and – with its craft beer and duck eggs – a tiny bit pretentious, then that’s fine by me.

The food’s intrigue and originality comes from its slightly ‘fusion’ spin on a familiar, very 2015 theme. Slow-cooked pork belly gets sharp, stoic, East-European blasts of horseradish and beetroot, but to leapfrog on the way to this acidity are several aniseedy and closed walls of flavour. A beef dish supplies similar round, Chinese flavours but in this case peanut and five spice is met startlingly with parsley – yet it works. Not so interesting are skewers of fried chicken that are tasty but not a lot more. 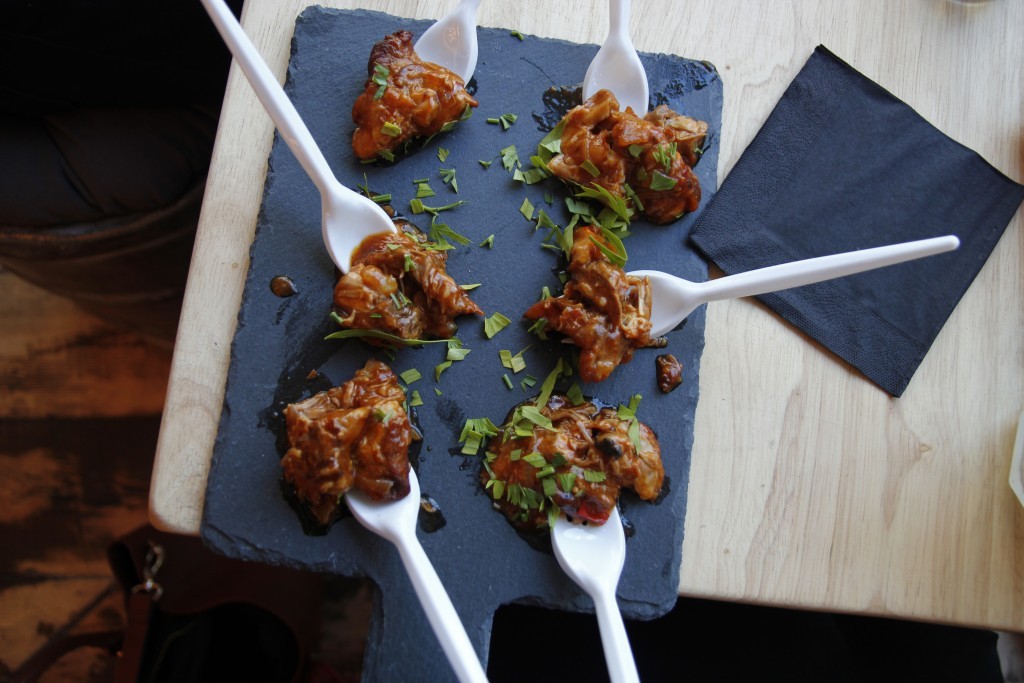 At the bar, the house lager is good and the smoked beer, one of a good selection of bottles, is astoundingly unctuous and loud-mouthed (beware: you will become drunk). The cocktail selection is good, quirky but still (in theory) crowd pleasing, but Milk of Sorrow was hugely disappointing, promising the grown-up thrill of blood orange but delivering the waxy, medicinal citrus of a children’s vitamin.

Having brunch and dinner sittings leaves the weekday lunch a bit of a question mark, though noises have been made about a deli counter. The structure also reveals clear homage to Butcher’s Social. This is arguably one of the best places in Birmingham from which to take inspiration but care must be taken: what keeps me returning to Harborne every single weekend is the absolute and consistent faultlessness of the food and the thrill of a different menu each week. These are big shoes to match. 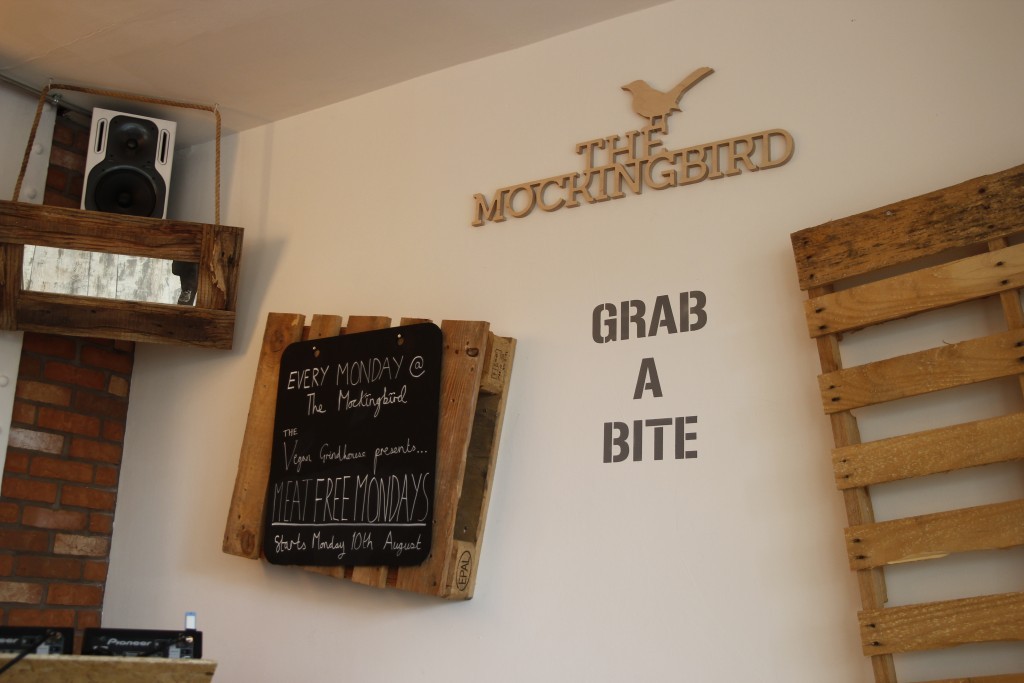 But the Mockingbird has a few tricks of its own. Mondays will see a meat-free takeover by The Vegan Grindhouse – a brilliant plan, though vegetarianism needn’t mean meat substitutes. And, along with other promised food/culture combos, a wonderful Wednesday package of two-course dinner, glass of wine and a film in the lovely theatre for £15: too good to be true if food and film are great.

If its intentions fully unfold then the Mockingbird could thrive. If it delivers food that keeps getting better, springs regular treats and surprises, and, crucially, pays real attention to what the Digbeth crowd is looking for, there’s no reason it won’t. 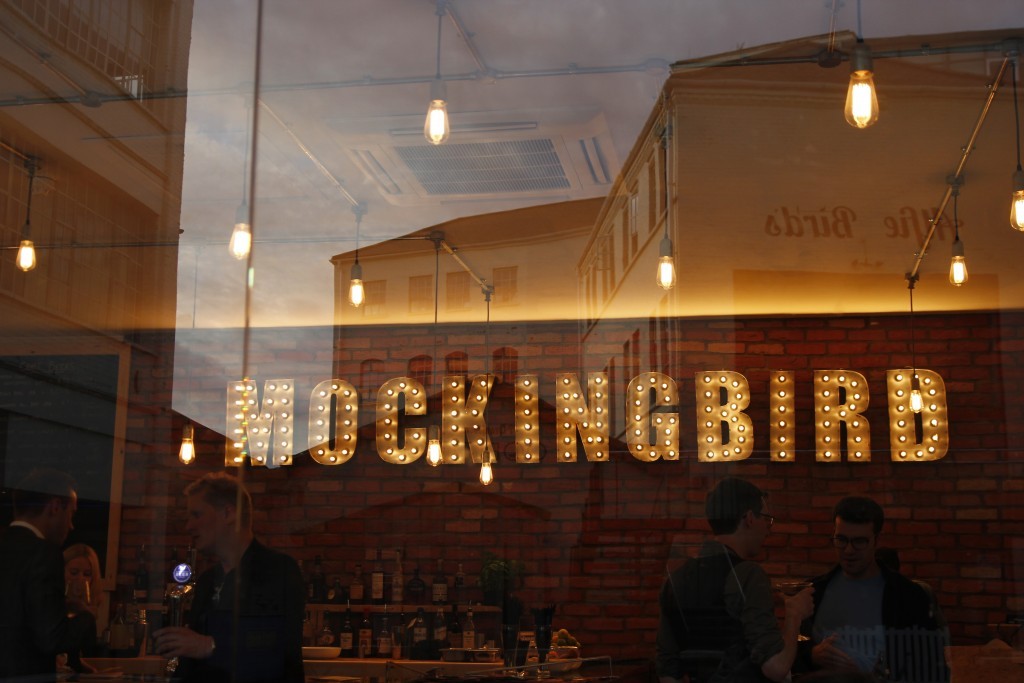 Follow The Mockingbird on Facebook to keep abreast of all their news and book tickets for their Wednesday film club and more.