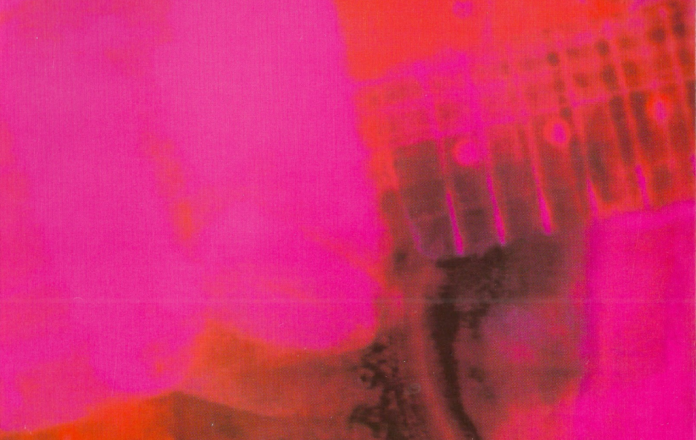 Bob Mould was in a rental car. His time as Husker Du’s abrasive anchor was over, and he was touring the UK as a solo acoustic act. His tour manager suggested they listen to a record, something that had the salacious guitar thrust that Mould loved so dearly. “I couldn’t believe what I was hearing,” Mould commented later. “This was the record I thought was never going to get made…no one spoke for the entirety of the record.” The artist? My Bloody Valentine. The message was clear – if Loveless could silence one of rock music’s most ferocious frontmen, it could silence an entire generation.

Of course, the title is almost ironic – My Bloody Valentine’s de facto leader Kevin Shields exuded nothing but love into the creation (pun intended) of the band’s second album – the guitarist and wordsmith searched high and wide to succeed in getting the perfect sound, one that fused tremolo-infused melody with disintegrating distortion. Nineteen studios, years of delay, £250,000 spent in recording, and yet upon its initial release, Loveless was something of a commerical disappointment, leading Creation Records to enter the financial crater they’d not wriggle out of until Oasis saved the day. And yet now, 25 years later, Loveless is one of music’s most important albums, a victory for dogged determination, a smoldering smorgasbord of ear-splitting squalls, calming oceans of wavy melodies and distant, dissonant vocals. It has been a touchstone for an innumerable amount of indie outfits, and quite rightly hailed as one of the albums that changed the face of face-melting rock.

Creation Records, and their head honcho Alan McGee, were having considerable difficulty with two of their outfits, with the most notable being disatisfaction with studios. Primal Scream were wrestling with their own masterpiece, Screamadelica, and were gliding along at such a leisurely place McGee threatened to pin Bobby Gillespie to a speaker stack. He’d have more success coaxing a classic out of Teenage Fanclub, with the fuzzy warmth of Bandwagonesque, but more troubles lay ahead with My Bloody Valentine – sessions for Loveless began as early as 1989, but Shields just couldn’t find satisfaction; on some occasions, the band would only use a studio for a single day before deciding it wasn’t going to be suitable.

By 1991, the label were tearing out their (now-grey) hair – by this point, Creation were completely cash-strapped, both Shields and singer/guitarist Bilinda Butcher (who had yet to record a single note) had succumbed to tinnitus and only an EP, Tremolo, had surfaced. However, almost overnight things began to click; Shields’ ‘glide guitar’ technique began to bleed success, and his insistence on recording the record as mono placed his six-string lashings firmly in the middle of the mix, like a landmine dictating a heavy shrapnel of sound. Butcher, who let Shields play her guitar parts on the recordings, would be coaxed into doing her vocals at 7.30am, just after waking up, which resulted in one of Loveless’ many charms – the dreamy, ethereal vocals. After a frustrating, financially-stunting period, Alan McGee feared Loveless would become a critical whipping boy, but as soon as it was released it became a firm critics’ favourite. It entered the charts at a disappointing number 24, but within time quite rightly became one of music’s most important, original and seminal albums. In an era where Kurt Cobain and Nirvana had blown the door open with self-hating grunge rock, there was little space for something new and exciting within music. As Billy Corgan once said, surely everything had already been done before? With Loveless, the four-piece created a collection that was a compendium of classicist sounds, mixed together to mould something completely individual – shoegaze, grunge, dreampop and indie rock were blended into a crackling cocktail, while Shields achieved the admiral sentiment of rescuing distortion from angst, using layers of fuzz to create a perversely calming blanket, resting heavily over the chugging rhythm section, rounds of echo and the heavenly vocal work.

In twenty-five years, Loveless has become an indie staple, from the bed of volatile fuzz that propels Butcher’s eerily detached voice on ‘To Here Knows When’ to the ghostly motifs and shrugging dispositions of ‘When You Sleep’. Their live tour became infamous, not least because of Shields’ noteworthy ‘holocaust’ section, a crushingly loud and visceral jolt of devastating distortion that would cause beers to be flung by the sheer force. Whether it be the tense tranquility of ‘Loomer’, the playful drum patterns of ‘Soon’ or the swaying, sun-drenched harmonies of ‘Blown A Wish’, Loveless was able to cover fertile ground and successfully change the way bedroom geek guitarists ploughed their fuzzy furrow.

It is still, quite rightly, one of rock’s best records, influencing the aforementioned Mould (Shields, as a gift, gave Mould a custom-made fuzz pedal, to which Mould responded by playing it on a song, fittingly, called ‘Gift’), to Beach House, DIIV and many more, but Loveless will never be equalled in terms of its power, performance and passion.