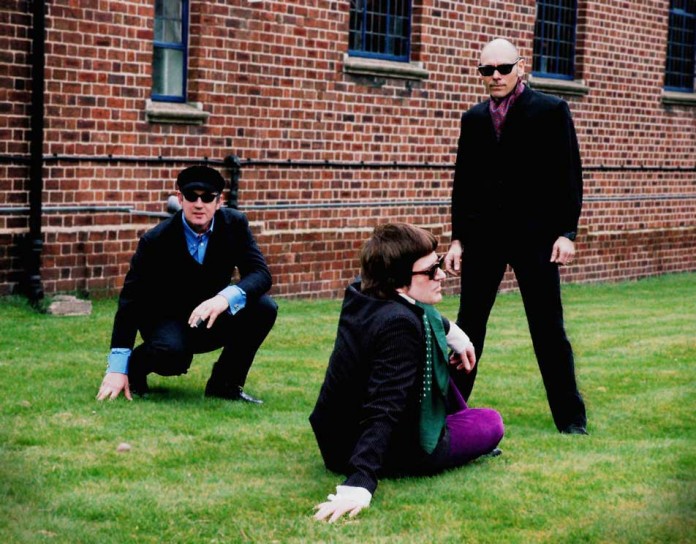 Beginning as the solo project of singer, songwriter and multi-instrumentalist, Mark Lemon, Village Green Machine have since expanded into a full band experience with Jason Holgate on bass and Paul Collins taking up the drums.  Taking their inspiration from a fascination with Englishness in mid 1960’s popular music and drawing from its culture and fashions, VGM embody a great 60s rock and roll sound.

Ahead of their performance at the Brum Notes November Issue Launch Party on November 7, we chat to Mark Lemon about what to expect.

How long have you been making music together as a band and how did the formation come about?

I played all the parts on the first album, then teamed up with Paul and Jacobites bassist, Glenn Tranter, for a Mark Lamarr session shortly before he left Radio 2. I was reticent about forming a band again, despite the Radio 2 session, but met a manager who seemed perfect to promote my music, so decided to form a band in 2010 which is when Jason came onboard on bass. The management situation did not materialise, but I had a band. Paul and Jason had been together in a band previously and Paul and I had worked together before. When we came together, it became apparent there was a certain empathy among us as musicians, as well as a certain social chemistry. These are rare things; there is a certain core, a solid core.

Where does the name come from?

The name came as a result of my searching for one which reflected a certain traditional antiquity. I was attracted to this quality in popular music as a result of having discovered Syd Barrett, and as a result of becoming attuned to the psychedelic era Beatles, especially the Penny Lane/Strawberry Fields material. It resonated deeper when I began to recognise my own social background, which was littered with eccentrics. I had a great uncle who insisted on chewing his food 40 times for every mouthful, and an aunt who would send scouring pads as Christmas presents. I have been accused of being an eccentric myself, a suggestion I strenuously deny. American music and popular culture of the 50’s and 60’s play a part in what we do too.

From where do you draw inspiration, musical or otherwise?

Paul and Jason are rhythm and blues inspired with in-depth tastes. Both are big Sex Pistols fans and we all like r&b, Dr Feelgood, TRex, The Rolling Stones. So I have a band who swing, as well as rock. These influences are at the bedrock of our sound, surely the inspiration to play originates in the music the musician loves. Personally I am inspired by the experimental, for instance See Emily Play, the early Pink Floyd record. Syd seemed to be highly experimental melodically, and there lies a challenge for me as a pop songwriter. How to create a great new song? Experiment with the melody writing, that’s not a bad start. The experimentation of the best 60s artists (The Beatles, the Byrds, The Kinks, Velvet Underground and others), is my inspiration, as is the sound they had. That sound was lost as technology marched mercilessly forward, but Village Green Machine is about harnessing that lost sound, as well as about arriving at good work through creative experimentation.

Mark, you say that your favourite lyricists include Chuck Berry, Noel Coward, Morrissey, Ray Davies, and Syd Barrett. What is it about these songwriters in particular which you admire and do you draw from them within your own songwriting?

I admire their deftness as writers. Any valid writing is about content and I suppose the technicalities of expression. I do think this borders into poetry. Chuck wrote about automobiles and teenage romance, about old folks having a rave up around the radiogram. But look at what he did with that source material. Keith Richards described him as the Shakespeare of popular music. John Lennon paid tribute to his metre. His songs sound so effortless, he had a naturally flowing talent. Noel

Coward had a wry humour but again, his words dovetailed together beautifully, he was quaint but knowingly so and possessed a certain acidic observation expressed in his songs. There was wit, as with Morrissey (though Morrissey was always driven by frustrated sexual desire). Morrissey is a rather tormented man and with him, the interior person is very much externalised, opening himself and becoming vulnerable to attack. But my inspiration from that is to do with the substance of  ordinary life which he expresses – everyday life of course being extremely interesting when elucidated by a writer like Morrissey or Alan Bennett. And this general approach is certainly inspiring to me as a writer. I think, talking about life in a literal way can create poetry, even if one is virtually journalistic. Ray Davies talks about a girl who lives on purple hearts and cigarettes, I mean the words sound brilliant. I am lyrically a literalist. Syd Barrett seemed to become rather more obscure as a lyricist after his breakdown. However it is the lyrics to See Emily Play which move me. A girl “gazes through trees in sorrow, hardly a sound till tomorrow”, I mean it is haunting and beautiful, and as such, Syd is, in this instance at least, more of an orthodox poet among my other lyrical influences. Actually I don’t draw from these writers very much. I have always written from within and tried to avoid derivation, but Bob Dylan and Cat Stevens probably made me express serious issues from the outset as a writer. Beyond this, I wouldn’t care to be influenced as a writer. I don’t like mundane lyrics, trite stuff.

Yes, I draw tremendous inspiration from my environment, to escape. I think serious pop musicians are like would-be professional footballers, or those who dream of being supermodels or whatever; we are inspired by our environments to dream of a better world, of a better life than working class suburbia can offer us. Music in itself is escape – David Bowie, The Rolling Stones, Marc Bolan, Siouxsie, all of these people, and Morrissey too, felt the same. Personally I had to create my own world within the geographical suburban environment within which I still felt trapped. Misty’s Big Adventure are a very good band, fun, clever and original.

Describe your recording process and the equipment that you use.

We record in a church hall – we put Paul on drums in the Alcoholics Anonymous room, where Jason and I rightfully belong. Jason goes direct from bass onto computer which is then put through tape, there’s no professional separation between vocal and guitar, you know it’s a very lo-fi thing. Link Wray just put cheap microphones in front of the instruments in his shed, and this is how I work. Because actually I am still reacting against music which is commercial in an absolutely vile way, the slick production stuff; the kitsch vat the legendary music writer Lester Bangs talked about, that of Elton John and Billy Joel. It is indeed the opiate of the masses – at least give the poor people the

real thing instead of destroying their brains with all that schluck. They will be blanded to death, the poor things. Village Green Machine are played on national radio as a result of using a £30 tape recorder, a reel to reel 1970s one, and beaten up ribbon microphones from the 50s and 60s which are repaired. I use an AC30 amplifier, a 1960s Futurama guitar, an Epiphone Casino guitar like The Beatles had, an original Farfisa organ from about 1965. Jason uses a vintage bass rig, Paul uses largely vintage drums.

You self-released your debut album, England’s Dreaming Spires. Is retaining your independence something which is particularly important to you?

It always seems to be a process of being thrown back to our own resources, having been let down by so many in the business. I have been number one in the charts in a previous incarnation, not in this country but abroad. Tom Waits wrote about a band I was in previously in in his autobiography. The Village Green Machine song White Plastic Moccasins was number one on a download site; I have met too many disrespectful people in the music business but if anyone has respect and interest the door could open. An inch or more.

Does fashion play a big part in the band?

Brian Jones, and his friend and VGM fan Price Stash are important inspirations for me personally, and once again, Syd Barrett. The peacock style, as quite well observed in the Austin Powers films, inspires me. In the mid 60’s, the movers and shakers threw the rule book out the window sartorially, making independent decisions aesthetically about what could be worn with what. For me, fashion and style, is very important. It expresses individuality in an environment where that is not permissible; style requires courage here. It also marks where one stands in the music world, it defines and as such yes, is an important statement. Those people who transform people’s wardrobes on television don’t understand the relationship between popular music and fashion/style and as such are limited in their endeavours.

You play the Brum Notes magazine November Issue Launch Party on November 7 with The Exploding Sound Machine. Have you listened to their music and what do you think if so?

Their music is passionate, I think Joey is a great singer and that the band are part of an inevitable evolution of music. The Strokes/Wire inspired scene is surely becoming a little jaded, it’s been going on for ages. ESM in my opinion are part of a movement which is superceding bands like The Killers.

What can people expect from your performance?

I don’t know, it is difficult to stand outside what we do, and everyone’s reaction is different. But certainly, we are ourselves and have created what we do ourselves, on our own terms. People can expect a pleasant jolt.

Village Green Machine play the Brum Notes Magazine November Issue Launch Party at The Bull’s Head in Moseley with The Exploding Sound Machine, Swerve and Noir plus Racing DJs. Entry is priced at £3 on the door – find out more about the event, here. 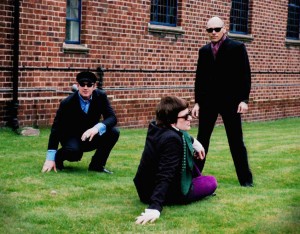