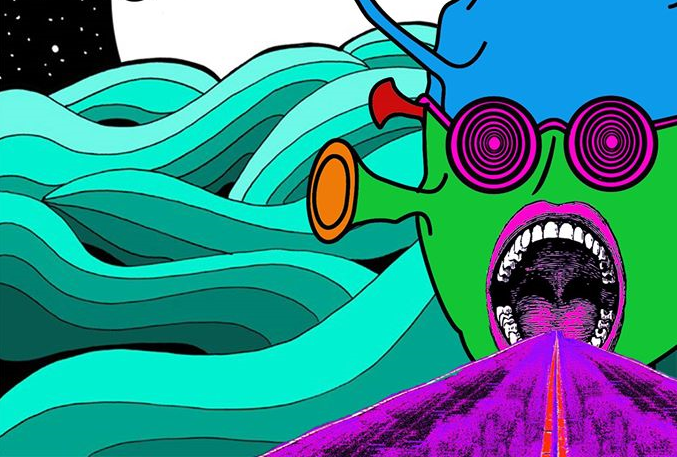 As the frontman of tie dye trad rockers Nonsuch – along with a history of psychedelic segues in various Birmingham bands – Harry Jesse Charles is a prominent figure in the Birmingham music scene. Thus, it makes perfect sense that he has began to blend his performing with putting on gigs of his own.

Van Gogh’s Good Ear have already began housing well-received concerts at Birmingham’s 6/8 Kafe, and on the April 28 weekend they will be housing the Into the Void festival, collating some of the Midlands’ freshest, and most diverse, talent. We spoke to Van Gogh creators Charles and Anna Brophy regarding promoting, playing and more.

What inspired you to set up Van Gogh’s Good Ear? Was it something you’d been intending to establish for a while?

HC: I started working at 6/8 Kafe, and in my first shift I noticed that they had this concrete-floored basement, where apparently they held various events. However, they hadn’t yet put on any bands – I think they were sceptical about putting on rock music, but the opportunity was there, so why not try it? Personally, I thought it’d be a great idea to put on some intimate shows, so I began thinking up what I needed to do to make it happen.

My girlfriend Anna studies music business, my mate Hershey is studying to become a sound engineer and then 6/8 agreed to let me use their basement, so we managed to make it happen. We don’t want to take things too seriously, but we want to showcase the great music Birmingham has and allow them to have a good intimate show.

You’ve been in a number of bands. Becoming a promoter, has that first-hand experience helped you get Van Gogh… off the ground?

HC: I’ve always enjoyed being in a band and I’ve always been productive when it comes to music. There’s no better way to spend your days. I wouldn’t say I’m a promoter – I’m just a dude wanting to put on good nights, good bands have a good time doing it. I want bands, people, students, anyone to get involved.

Being in various bands has helped me start Van Gogh…I know a lot about setting up gear, the struggles of lugging around 60W amps, getting paid with cans of Red Stripe. I’ve had some great times doing it and I think being a musician has helped me a lot when it comes to putting on these nights. It’s weird as us musicians all think alike…we’re in a bubble all floating ready to pop. It feels good. I can feel the burst.

Do you feel with the Birmingham music scene’s diversity and togetherness, Van Gogh… will be able to bring these bands together?

AB: Van Gogh… has always been about celebrating the diversity of Birmingham’s music scene, and we’re always looking for new and exciting bands to create the most unique of nights. It’s exciting to have a city full of bands creating different genres of music. It mixes it up a bit.

HC: We’ve already had a strong set of bands playing for us already, including You Dirty Blue, Guyana and Dead Summers. We have more bands booked for the next few months – it’s going to be one hell of a wave. We have helped do promotion for Ian Curtis Rides a Rollercoaster and allowed them to use the basement, where they’ve also put on some great bands. I think we’ll be working with those dudes more.

What are your plans for the future with Van Gogh…? Do you see it becoming a bigger concern?

AB: We’ve been in talks with a venue so an upcoming event is in the works. We want to continue putting on music at 6/8 Kafe – the venue’s got a really nice feel to it, but we want to expand our name to other venues in the city as best as we can. At the moment, the size isn’t much of a concern as we like the intimacy and rawness of the venue – everyone’s up close and personal with the bands, so there’s more interaction with the crowd.

You’ve got a festival coming up in April entitled Into the Void, with a raft of excellent bands already confirmed. Are you excited for the challenge?

HC: It’s a collaborative thing – Ian Curtis… are running the Saturday night, while we’ll be running the Friday. We have some bands that have joined us before, as well as some new bands playing. We have a later license so we can have a bit more of a party. I just want bands to have a blast, not a bust. I have high hopes it’ll be a great night.

If someone new to Birmingham came to the city on that weekend, and happened to come across Into the Void, what would they expect?

AB: They should expect some of Birmingham’s most exciting music. Every band will have their own thing going on. It’s gonna be loud.

HC: I hope we do get some outsiders! They should expect some madness – smoke machines, lasers, loud music. There’s a lot of diversity in the music scene and that’ll make it exciting.