A key member of The Cinematic Orchestra for many years, Mancunian guitarist Stuart McCallum’s latest solo album, The City, treads a similar path with an enticing mix of dance, electronica and jazz.

The track Trio Seven features a sample from folk trio Lau who, in many ways, have a similar experimental attitude to yourself – would you agree…?

Yes! They seem to embrace their tradition but are keen to move things forward. Another folk band that I like who seem to have a similar attitude are Spiro. 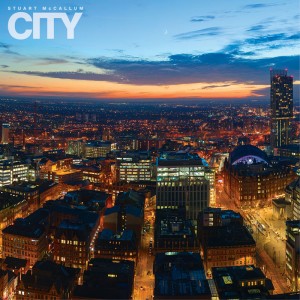 The city on the album cover looks like Manchester. So, would it be fair to say that Manchester has shaped your music…?

Yes it is [Manchester on the cover]. And yes I would say that it has. I’ve grown up within the Manchester musical community and that has influenced my style and musical direction more than anything else.

Earlier work has been instrumental based, but this album features several guest vocalists, including Sharlene Hector (Basement Jaxx) and Sophie Barker (Zero 7). Why now?

It’s quite a natural progression for me – I’ve just become more interested in vocal music over the past few years. If I put on a record now I wouldn’t want it to be all instrumental, so it seemed obvious to me that I should have some guest vocalists on this record.

How did those particular tracks come together?

North Star [with Sharlene Hector] and Said&Done [with Sophie Barker] were tracks that Richard and I thought needed vocals, so we wrote the melodies and some lyrics and then chose the singers that we wanted to sing on them. The title track, City, came about as JP Cooper was looking for people to produce his tracks. I’ve known him for a long time so I said that I’d do one for him. I recorded him singing one of his songs and then basically did a remix of it. I chopped up the vocals and some drum beats of Richard’s that I had from a previous recording session and wrote some new chords. I then sent all this stuff down to Richard who wrote all the synth parts and basically brought all the components together and finished the track off.

The album’s produced by drummer Richard Spaven, who is also credited as co-writer on 7/8 tracks – how did you two meet and come to work together?

We met when Richard was doing some shows with Cinematic Orchestra and hit it off both personally and creatively. I then went on to do some co-writing on Richard’s album, Whole Other, and then I asked him to produce this record.

How did you find sharing the creative process?

Everything happens quite naturally between us, so although we work hard at it, the music just seems to happen.

Is the line-up who recorded the album touring with you?

The line-up for the live shows features some of the musicians of the record: me on guitars, Richard on drums and Robin Mullarkey on bass. We also have Manchester-based keyboard player John Ellis on keys and a young Leeds based singer, Dija Bhlue, who are doing the live shows.

You’ve previously collaborated with artist Linder on several projects, including The Dark Monarch (2009), the 13hr performance piece The Darktown Cakewalk: Celebrated From The House Of Fame (2010) with fashion designer Richard Nicho, and The Ultimate Form (2013) with Northern Ballet. Any more plans to work together again?

There’s nothing in the pipeline at the moment but we are still in touch and I’m sure that we will work together again at some point in the future.

Would working with another visual/performance artist something of interest?

You’re described as playing ‘alternative jazz’ – how do you feel about the label?

Fine! I can’t pigeon-hole what I do so if that’s what people want to call it then that’s fine by me.

I’m touring the City album on and off until February next year. Then in April 2016 I have a new project being released on Peter Gabriel’s Real World Records label. The band is called The Breath and the album is called Carry Your Kin, so I’ll be busy with that for the rest of 2016, although I do have some more shows for the City project lined up in September 2016.

* Stuart McCallum plays The Hare and Hounds, Kings Heath, Birmingham, on Thursday 3 December 2015. Tickets £10 advance via thsh.co.uk (or available on the door).

The City is available now via Naim Jazz.