Colossal, monumental and gut-wrenchingly furious – Wolverhampton’s God Damn make more noise with two people than most bands could manage with 20. But their blend of grunge, sludge and heavy metal is also beautifully refined and intelligently written, earning them attention from plenty of interested record labels. Now signed to One Little Indian and with a debut album on the horizon, we catch up with them ahead of their homecoming headline show at the Slade Rooms this Saturday (June 7).

The Wolverhampton heavy rockers have had a pretty successful few months. After being snapped up by ultra cool independent label One Little Indian, they’ve released a handful of singles (one recorded in Liam Watson’s legendary all-analogue Toe Rag Studios), added an impressive amount of favourable press to their repertoire and played the live shows most bands are still thinking about in their bedrooms, including a tour with Heavenly Recordings’ Brighton trio The Wytches.

“We had a few people sniffing but One Little Indian were the most militant at the gigs,” says Thom, “and their ethos as a label sat right with the band.”

“Things are looking pretty good at the moment though,” continues drummer Ash Weaver, “we feel very lucky to be in this position. It’s funny, because I can tell you the exact show that we could feel something happening. It was at the Black Heart in Camden towards the end of last year. We were just finding our feet as a two-piece and we played a blinder of a set. I can remember saying to Thom on the way home that I hoped there was someone watching that night. Funnily enough, One Little Indian were there.” 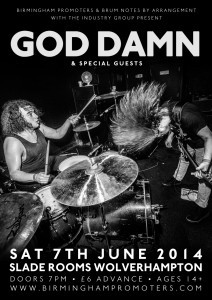 God Damn have always had a penchant for a good old fashioned rock song. What they do so well is to blend the blues of rock’n’roll with the heavy metal aesthetic the West Midlands was so prominent in popularising, and layering it all with a scuzzy grunge panache. The past year has been turbulent – the band were forced to re-jig from a three to a two-piece after guitarist Dave Copson was involved in a serious accident. Thankfully Dave is on the mend and God Damn have written and reconfigured their way to an album of near completion, set for release in the new year.

“It’s looking to be 12 new songs and one old one which we thought sat right,” explains Thom. “I came up with the guitars and melodies at the start of the year and we wrote them together in the space of a couple of weeks so it’s a really congruent body of work both musically, thematically and collaboratively. We tried to be really sonically creative in the studio both with the guitar sounds and the percussion, I like to think it’s an album which could be played by 10 people or two people. It’s rants and raves, aches and close shaves for nations of the vexed and ill-behaved.”

However, it hasn’t all been plain sailing. God Damn create music which demands your attention, it’s loud and it’s abrasive and it’s belligerent. Which demanded a name to match, right?

“The name was originally a bit of a joke between us which stuck when we started playing shows,” explains Ash. “It suits the music but we never wanted it to be provocative or cause conflict, we just thought it would stand out. For anyone who is religious, we don’t mean to cause offence…”

“When we initially started we just wanted the music to piss people off but we’ve matured a little since then. Let’s not lie, we did have some trouble with our name and the radio, but people drop this so-called blasphemy all the time so it seems like mindsets might waver,” adds Thom.

In reality God Damn are going from strength to strength. This weekend they return to Wolverhampton to play one of their biggest shows to date.

“We don’t have tricks as such but we do have Dave coming on to do a few songs with us so expect some oldies that you may not have heard us do for a while,” teases Ash. “Apart from that, it’s going to be a full on nuts show, as always, we wouldn’t want to give you anything less!”

READ THE FULL INTERVIEW WITH GOD DAMN IN THIS MONTH’S BRUM NOTES MAGAZINE, AVAILABLE TO PICK UP FOR FREE ACROSS THE WEST MIDLANDS, OR READ IT ONLINE BELOW: