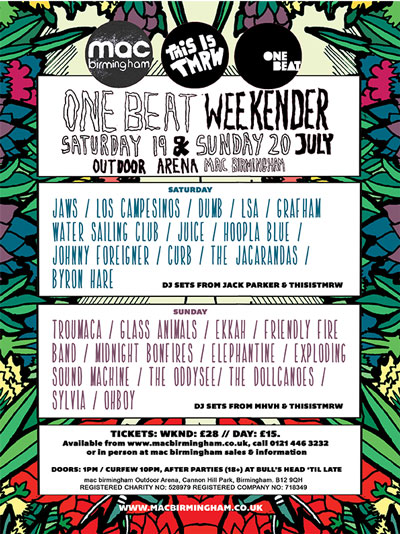 Glass Animals join the bill for new music festival One Beat Weekender this Sunday. They tell Matthew Way why they’re so excited…

“I think when anything becomes too predictable you lose peoples’ attention,” says Glass Animals frontman, Dave Bayley. There’s little threat of this on their debut record, Zaba. The Oxford outfit’s first LP has grabbed the attention of many and Dave is clearly happy to talk about how it is being received. “It’s really exciting to have Zaba out in the world. It’s been hidden under our bed for a little while now. This is sort of like your first week of school…are you going to make any friends? What do they eat for lunch at this school? How do I escape from French class? Those are the questions flying through our heads at the moment.”

The story of the formation of Glass Animals is an unusual one. Dave suffered from insomnia while at medical school and found he had many a spare hour to occupy his busy mind. “I used to come back from the hospital or from my after-school job a bit wired. I just had trouble shutting off my brain I guess. At first I started listening to music to help me get to sleep. That eventually evolved into trying to make some of my own.” And after sharing this music with his three closest friends, Glass Animals were born.

Dave had previously described the album as ‘a backdrop of man-made wilderness’. And when asked what people could expect of the record, the answer is a logical one. “It’s a concoction of all the music we have and do listen to, combined, melded together and spat out onto a CD”. Producer Paul Epworth (Bloc Party, Adele) was the man responsible for helping them put it all together. “Paul let us loose in his studio,” Dave continues, “there is a lot of amazing gear in there that we spent hours playing with. There were even some amazing children’s musical instruments lying around, which were wicked, some of them made it onto the record actually. If you listen to Pools you can hear these big plastic, multicoloured tubes called ‘boomwhackers’ we found. They are the main balearic riff that go throughout. It was neat”. 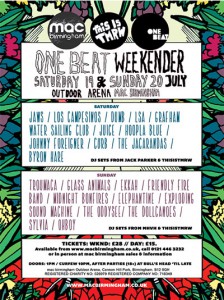 Inspiration for the album came from a pretty large spectrum of sources, including Charles Darwin, Nina Simone and Kanye West. Eclectic listening habits, it would seem, and Dave admits they are completely open in terms of what music they consume. “We listen to loads of different kinds of music, and what’s on the stereo changes every week. Apart from Kendrick [Lamar], he’s always on the stereo. Hip hop is something we listen to a lot, both new and old. Electronic music old and new. R’n’B, krautrock, psychedelic music, and we still occasionally listen to the stuff we listened to when we were young and became friends, bands like The Strokes and LCD Soundsystem. This list could go on forever.”

This eclectic taste is perhaps what makes Zaba such a satisfying listen. The storytelling throughout is curious and playful but the hip hop-influenced beats are heavy and intense. You really don’t know what’s coming next.

With such a rich sound there were always going to be questions over the live translation. “Developing the live set is a lot of fun, and a challenge,” says Dave. “Some of the songs on the record have so many layers that it’s not possible to recreate them all unless you have a backing track, and we decided early on we wouldn’t ever use those. So we have to strip back songs sometimes, or maybe a better way of phrasing it is focus on some key elements of the song and develop those.”

Fans in Birmingham will get a chance to see how it all translates when they take up their eagerly-anticipated spot on the One Beat Weekender stage this month. “Birmingham is really kicking off huh!” David exclaims of the city’s current musical climes. “It’s exciting to see from the outside, it must be great to be in and amongst it. Peace are cool. They have some neat songs off that last record. Their new record is one to watch. I hope they go psych-y… I kind of feel like they could.”

But back to Glass Animals, what does the future hold for them? “Drew is going to look for his glasses which he lost yesterday in Oxford, we might not see him again…I’m completely serious. Drew without glasses…yikes. Watch out Oxford”.

And watch out Birmingham. The animals are loose. 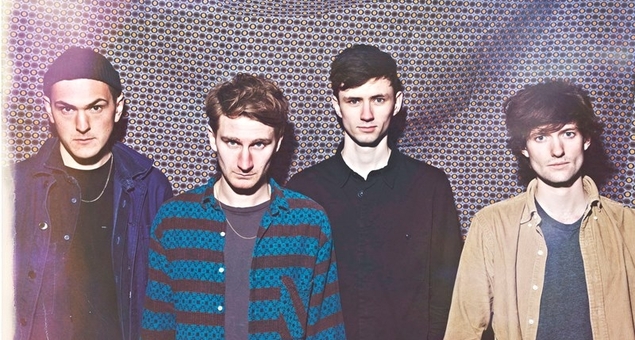