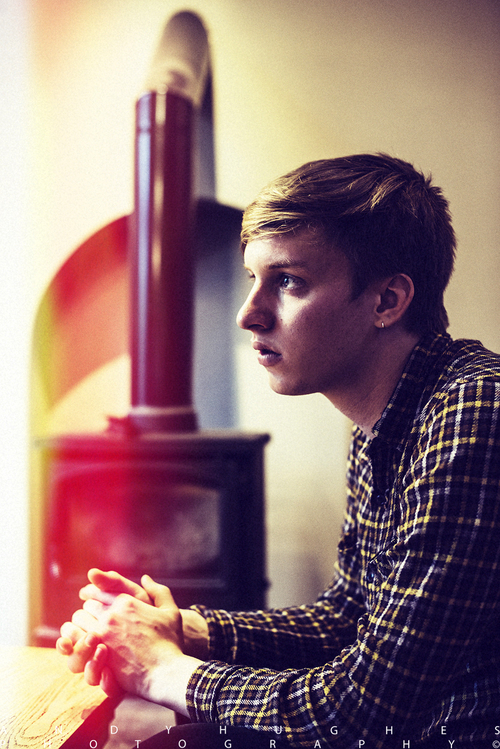 Hotly-tipped in plenty of ‘ones to watch’ lists at the start of 2014, George Ezra has already clocked up sold out dates and plaudits galore so far this year. But with his debut album due out this month and a UK tour to come, attention on the young musician is set to go into overdrive. Jon Pritchard meets a songwriter recapturing the art of compelling storytelling.

“So my first stop was in Paris, and I gave Macaulay Culkin a ring, and he was like, ‘yep, come round.’ So I stopped at Macaulay Culkin’s house, but it was only for one night.”

Well there’s a sentence you don’t hear every day. When George Ezra walked into The Village in Moseley to chat to Brum Notes, no one batted an eyelid. Even we didn’t and we were looking for him.

What the people around him didn’t realise is that amongst them was someone who not only has one of the most distinctive voices in the current crop of British musicians, but is also pals with Hollywood stars. Kipping at the Home Alone star’s pad isn’t a bad first stop for a few weeks of travelling around Europe, and it’s also the sort of a story that has got tongues wagging about George Ezra. Aside from his wonderful voice, he has written an album full of beautiful songs, all with superb narrative threads.

But they aren’t all as they seem. Take Budapest for example, his most notable song to date. “I was in Malmö in Sweden and the Eurovision Song Contest was being held in Malmö on that night, and I didn’t have a clue about it but everyone there seemed to be really excited about it and having parties,” he begins.

“But I didn’t know you couldn’t buy alcohol after 10 o’clock at night. So I ended up buying a bottle of like, rum, or something like that from a guy in a park so I could have something to drink at this party. Anyway, I was meant to be getting a train to Budapest the next day, and I never got it because I was too hungover and didn’t fancy it. So I wrote the song about being miles from Budapest.”

For a young lad, he’s got some fantastic tales, but he also has an aura of charm and a sense of being very down to earth. What other 22-year-old man would take his sister on tour with him, for example?

“It’s a deliberate thing, because we get on really well,” he explains. “I did it for me. I used to do a lot of touring on trains on my own and this time I thought, ‘this is a long stint, I ain’t been home since…well I don’t know’. But it’s nice because Jess just tells me when to shut up and when to get on with it. It’s nice to have someone who doesn’t believe the hype. She’ll still turn on me and tell me my breath stinks.”

He has been on tour with his mates, but that doesn’t always seem to end very well. We sense another story coming on.

“My mate back home, he’s a scaffolder and he loves Cornwall, and twice I’ve done these tours of Cornwall and said ‘I’ll give you x amount of money’ and we just get on it. The one time we were in St Ives and the guy who owned the pub I was playing gave us the keys and let us stay there.

“The one time we went back with two girls and when they wanted to go home we found out they had locked us in. So we ended up having to envelope these girls through a window so they could go home.”

George has been touring pretty much non-stop since the turn of the year, and he once again shows that he has a wise head on his shoulders when he talks about how he deals with travelling around the country – and Europe – on a bus.

“I’ve actually started to write a journal, even if it’s just a little note of what I have done that day, just to separate the dates.”

While he may sound like he comes from the deep south of America with his deep, soulful vocals, he cites Bob Dylan as one of his biggest influences. “Dylan was what got me into music,” he says. “My Dad played a lot of Dylan at home and I did my own homework and found out who Dylan had listened to, but then also I grew up looking up to my older sister a lot, listening to The Libertines, Vampire Weekend, all these indie bands like Arctic Monkeys as well. From 2005, England just smashed it for bands for like two years.”

With two EPs under his belt so far, Ezra’s own debut album, Wanted on Voyage, is due out at the end of this month. Unsurprisingly, you can feel the influence of those stories and anecdotes collected on his travels.

“The whole album in someway or another comes from that. What was happening before that was I was travelling from Bristol to London every day, same train, same faces, I wasn’t seeing anything awe-inspiring.

“It just needed to happen, I just needed to get up and go. I was feeling pressure on myself from the label – there wasn’t any. All you need to do is do what you were doing before but I felt like I needed to be doing something different. So I took myself away.

“I took my guitar but I didn’t do many gigs at all. I just filled my notebooks up with what I was doing, who I was seeing, and when I got back I left them for about three months. When you go back to them it’s like someone else has handed you the stories, it’s like free words.”

Walking into pubs unnoticed may of course not come so easily to the Bristol-based musician once his album does come out. But we know there’s one thing on your mind – how the hell does a 22-year-old musician from England who doesn’t even have an album out yet become friends with Hollywood upstart Macaulay Culkin?

“I supported Adam Green and Macaulay Culkin was on the whole tour,” Ezra explains. “So I said to him, ‘I’m going to be travelling around Europe’, and he said, ‘I’ve just moved to Paris, here’s my number, hit me up’. I was like, ‘what is going on?’”

George Ezra is live at The Glee Club, Birmingham, on June 16. Tickets have now sold out. His debut album, Wanted On Voyage, is out on June 30 through Columbia Records.