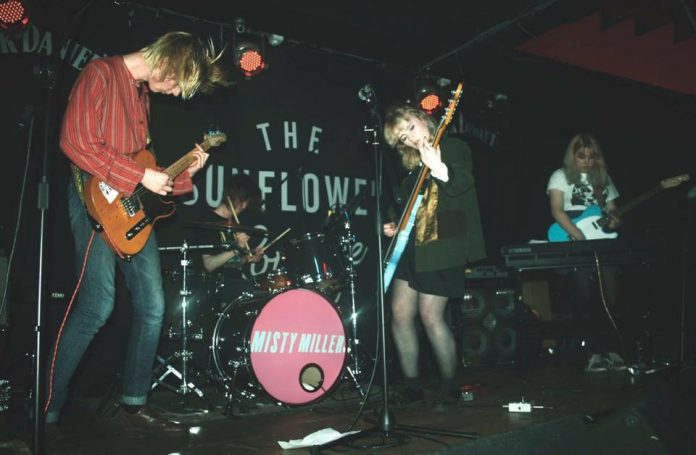 Allow us to be frank – Frank are one of Birmingham’s most exciting bands. With admirable support slots with rapidly ascending acts such as Misty Miller, Kagoule and The Orielles, the four-piece Meg Ronan (bass/vox), Jack Spittle (drums), Jordan Spittle (guitar) and Charley Mack (guitar) have created an individual blend of abrasive art-rock and chorus-inflected melodies. With the band gearing up for the future, Sam Lambeth finds out more.

Song-wise, some have the abrasiveness of Pretty On the Inside-era Hole with a more psychedelic sheen. Is the aim to try and find a balance between more hard-rocking stuff and dreamier material?

Jordan Spittle (JOS): That’s exactly what we’re going for! We hate the idea of our music being pigeon-holed into one genre, we’re trying to find the right balance between psychedelic dream pop and alternative rock.

You’ve recently bought Charley Mack to the party. What has she bought so far? Anything different and exciting?

MR: She’s brought the fun back into the band. The fact she can play keys has made a huge difference to our sound – expect to be hearing a different Frank in the future.

There’s a nice 2/2 split here with two guys and two girls. Do you guys feel there’s still, even in 2016, a stigma attached to being a girl in a band? Or is it improving?

JOS: Personally we think that the stigma will never go away as long as people fixate on the idea of women in bands. For example, in the riot grrrl movement the bands and musicians that were around at that time wanted women to become more of a staple in the rock genre even though there had been women in bands for years before that, when all they did was make women in rock seem like more of a novelty. It’s far more of a political and social economic matter than just music, the oppression of women has been white washed over for years and until they are represented better in the media, politics and music – it won’t get any better.

Jord, you’ve put a few tracks up yourself over the past few months, and there’s more of a trip/hop vibe (Tricky, Massive Attack, the whole late nineties kind of sound). Do you think this might slightly incorporate its way into new Frank material?

JOS: Thank you. For the most part yes, but whenever I write I can always tell whether it’s a Frank song or my song, they’ll always be something different about the two.

It’s fair to say you’re one of the most exciting bands in Birmingham, which is no mean feat considering Birmingham is replete with some pretty great acts. What are the next steps for Frank?

JS: Well at the moment we’re going on a break, we want to focus on honing our sound and putting something out that truly represents Frank today, as we think our recorded material sounds completely different to how we sound live. Expect to be hearing new things from us very very soon.

You’ve supported some awesome bands, and that’s set to continue with a slot with Misty Miller. Getting to support touring, nationally-recognised bands/artists must be good for you guys in terms of picking up contacts, tips and stuff, right?

MR: Yes definitely. We’re so grateful for so many of the amazing bands we’ve got to meet and support, we can’t say anything’s official yet but we’ve been in talks with a certain singer from a very well-known band about something very special happening soon. It’s all so exciting.

When it comes to song writing, then, are these tracks born out of jams, or do you individually go away and write?

JS: We individually will write riffs/parts alone sometimes and bring them to the rest of the band but most of the time our songs are born out of hour long jams. Meg always writes her lyrics.

Shallow End got positive reviews when it came out, were you pleasantly surprised at just how widespread the reaction was?

MR: Yes very surprised! Shallow End was the first song we ever wrote and it’s very dear to us, we just never expected it to be “single material.”

So it’s rumored Jord and Jack are twins. So let’s finish off with a musical question – who would win in a fight, the Spittles or the Jarmans?

JS: Yes we are twins and of course we would win, the Jarmans don’t know who they’re messing with.