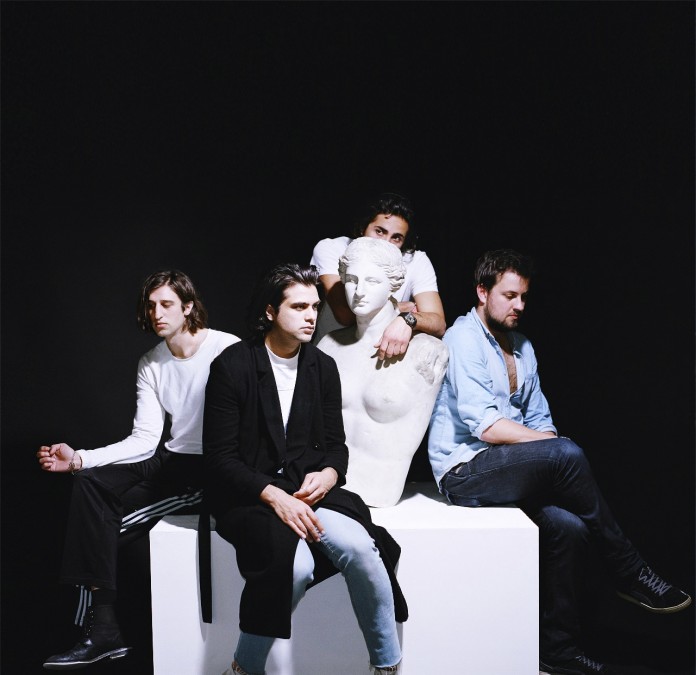 After recording it back in the summer of 2012, the debut album by Famy finally sees the light of day this month. They’ll be heading out on the road as well, determined to show why the early excitement they generated was fully justified. They talk to David Vincent.

Back in 2011, Famy looked poised to break through. Their debut single, Dogg Dogg, resulted in a slew of well-placed reviews on influential blogs and music sites, and within a year the band were recording their debut album, We Fam Econo, which included the track Donkey. Concluding with the declaration “Famy is here!”, in retrospect it seemed a little premature as it’s only now that the fruits of Famy’s labour are seeing the light of day, with that album finally due out more than two years later this month.

“We recorded the album in the summer of 2012 and we’ve had a lot of management issues, boring kinds of things that just needed loads of time to sort out,” explains Arthur Yates of the album’s much delayed release. “So we’ve been sitting on this record which we really believe in, but we had to sort out all the logistical things first.

“It was the most frustrating thing,” he continues. “When you write something, you want to record it straight away and get it out immediately after.

“To be honest,” he sighs, “to have that gap, it can be frustrating. But we stand by the record, we completely believe in the record. Things in the music industry just happen at their own speed.”

“We all met when we moved out there. Luca moved there from Italy, myself and my brother moved there as our parents wanted to be in the sun and experience a less hectic lifestyle than London. That’s how it all happened, and we met at school.”

From the warm air of Europe, the band later relocated to London, and it’s here that the Famy sound – think Glasvegas reverb mashed with indie/folk sunshine – began to solidify.

“Our inspiration was coming from where we grew up. Our record, for me, sounds like a rock band in the south of France. There is The Sandpipers in there,” says Arthur, referencing the easy listening 60s combo, “and the Beach Boys – they had that Mediterranean feel. Then we came to London and we discovered rock’n’roll. So it’s a marriage of those two sounds, the south of France and London.”

The 1980s DIY punk/hardcore scene has also been an influence, though it’s more about the artistic integrity, work ethic and can-do attitude than the music.

“Possibly the biggest important influence for us is the Minutemen, they’re DIY forever. Their idea for punk was great, for them, making a record or making whatever they wanted to make…they did.”

Recorded in Gloucestershire by Miti Adhikari (whose CV includes BBC Radio 1, Nirvana and Radiohead), We Fam Econo’s distinctive echoey sound was a product of the unique choice of recording venue.

“We recorded in a church in the English countryside, this very big church that gives the record that cavernous sound that we really like. It suits our music,” says Arthur. “We tried to make it sound as natural as possible, so we put the bass amp in the bell tower of the church and recorded that.”

But does the delay between recording and release affect how the band feel about the album? “The way I see this record is, I see this as a period, a record of the band at that period,” Arthur explains. “It encapsulates the place we were. It’s naïve, it has a lot of beauty to it. It’s a very honest and humble record that we made. It’s very, very pure. We’d just started up the band. I think those are the best parts of being in a band – that time when you’re just creating, not trying to create some kind of product.

“Live we try to keep it fresh, but it does have a different sound. Live it’s more raw, there’s more of a punky edge, we like to make our shows more raucous.”

For those who haven’t seen the band live, a clue to where they are today musically is the recently recorded new single Friends Home.

“That’s naturally the direction we’re going in, it’s where our new stuff is going,” Arthur says about the non-album track. “Our first album gave us a lot of room to explore new avenues. It came very early for us. Our newer stuff is more considered, we’ve had time to look at where we are going and where we want to go. We have a plan.”

Famy are live at The Sunflower Lounge, Birmingham, on September 22. Tickets are priced at £6 advance and are available here. Debut album, We Fam Econo, is released on September 8 through Transgressive.