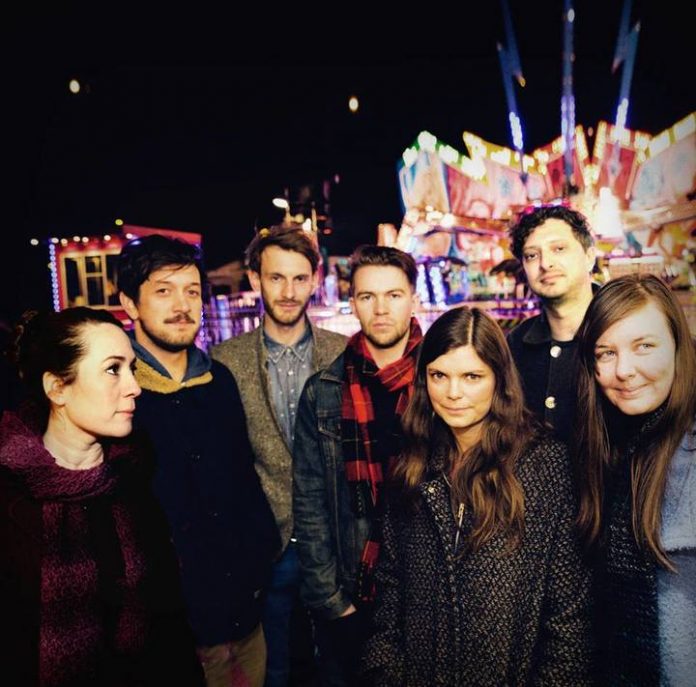 The influences of urban and rural environments, classical music and cinema continue to shape The Fair Rain, but as the Birmingham band grow, other elements filter through.

“Those themes and influences continue to speak through the music we’re playing now, though I think as we’ve matured we’ve become bolder and engaged with weaving together more of a human narrative within the songs,” says frontman Robin Beatty. “There are so many possibilities of sound within a seven piece band, and we’re always exploring what we can do.”

Featuring The Banks Of The Tahiti and Mannequin, it’s an accomplished successor to their Old Dance School catalogue.

“I came upon the idea for The Banks of Tahiti from researching in the journals of Joseph Banks on Cook’s expedition to the south-Pacific,” says Robin. “They describe an extraordinary trade practise with the Tahitian women from a radically liberal island culture.

“After months at sea, the ship’s men had near exhausted the supply of their much sought after metal commodities, and resorted to removing the iron nails from the timbers of the ship itself!

“Mannequin is another striking historic story that I wanted to tell. It follows Belgian tailor Frantz Reichelt who self-tested his wing-suit invention off the Eiffel Tower in 1912, with the world’s press gathered below.

“It gives me tremendous respect for the audacity of these early pioneers of technology we now take for granted. I can’t help but feel though, that Reichelt was a man consumed by the idea of fame and glory, which became his sorrowful demise.”

Over the coming months the band have “a handful of festivals over the summer” followed by UK and European dates in the autumn. But before then, they’re appearing on the bill for Birmingham Town Hall’s Imagined Isle festival, as part of the opening Urban Folk Night (12 May 2017) with Birmingham’s The Urban Folk Quartet and Conservatoire Folk Ensemble, plus Dan Walsh and Rusty Shackle, from Wales.

Discussing the bill, Robin says: “I think there are a lot of shared values – an open-mindedness to absorb diverse influences, which I reckon is a characteristic of Birmingham bands generally and strongly linked to the culture in this city.”

* For more information on The Fair Rain see: www.thefairrain.com