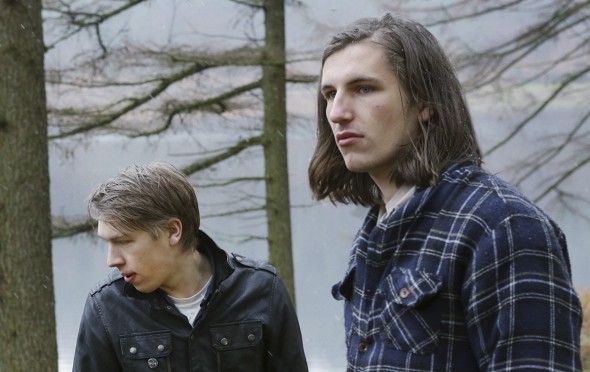 Derbyshire’s grunge rock duo Drenge return this month with their second LP and a European tour. Ahead of their stop-off in Birmingham, Guy Hirst talks to guitarist and vocalist Eoin Loveless about tension with Swim Deep, Kanye West at Glastonbury and torturing a Pikachu.

“People really expect something of us because of our first album,” says frontman Eoin Loveless, discussing the inevitable added pressure that has greeted the recording of their second LP, Undertow. “I didn’t think we were fucking with the formula at all but reviewers seem to be suggesting that we’ve really changed stuff around. It’s more polished because I’ve put four months of my life into this. We finished it on New Year’s Eve, I had a horrible breakdown about it all and didn’t go out, so [negative] reviews are nothing compared to the mental damage I’ve put myself through. I’m really proud of Undertow and for me it’s a 10-out-of-10 record. This is the best I can currently do,” he asserts.

“How the album is received won’t have much of an impact on me until the people who’ve pre-ordered the record get to hear it. Journalists, the label and festival bookers all aside, the fans are the reason why we get to do this.”

But if you’ve seen Drenge, primarily a two-piece made up of Eoin and brother Rory,  in the last two years it’s likely you would’ve heard a good chunk of the tracks from Undertow, with Running Wild played for two years, The Snake about a year and Standing In The Cold for the past nine months. However, Eoin is most excited for Drenge-diehards to hear album-closer Have You Forgotten My Name – “From a writing point of view that’s one of the best songs we’ve ever done,” he says.

Despite having openly expressed their disinterest in adding additional members to their lineup, Drenge now see bass player Rob Graham join their ranks, having contributed to three tracks on Undertow and became a touring member this year.

“Rob’s my housemate and we’ve known him since we were kids,” Eoin explains. “He’s instrumental in our musical history and has always been incredibly supportive. He’s put us on supporting bands that he’s been in.” But specifically Eoin points to a mix-CD that Rob made for Rory (Loveless, drums) when he was 15. “It was called ‘The History Of Punk.’ It had stuff on it like Dead Kennedys, Iggy & The Stooges, Ramones and even Radiohead. If it wasn’t for Rob there wouldn’t be Drenge as we know it,” he adds.

“When recording Undertow there was a layer of low-end missing. We were recording pitch-shift guitars that sounded really synthetic and fake, then we tried using synths playing really low frequencies. It just sounded wrong so I started playing bass on most of the record. Rob was getting stressed out working in this coffee shop, so it just made sense to ask him to join the band. We’ve had to write basslines to all of our old songs because I didn’t want to just roll someone on and off stage when we were playing. So all [songs from] the first album now have bass too.”

After all the studio time, meetings with journalists and stress of releasing Undertow, Eoin’s eagerness to get back to Drenge’s roots by playing gigs is palpable. “We haven’t played that much live in the last six months and playing shows is what the band’s all about. When we started out we had a gig every two weeks somewhere in Sheffield, we didn’t practice or anything because we couldn’t afford a space, so gigging has always been important to us. We’ve played places where shit’s gone crazy then we’ve done shows in America to like six people – there you have to improvise the vibe, just ignore that the room’s almost empty and be like ‘we’re just gonna play really well tonight’. The audience really make it worthwhile.”

Although they may have played to six-or-so people at one particular date in the US, their American television debut on the Late Show With David Letterman in January was likely to have reached 2.8 million, where they performed their latest single We Can Do What We Want. It also turns out they were also approached by Kanye West backstage for a chat, mentioning to the duo that he was interested in “making his music more aggressive”.

“I’ve got a lot of respect for him,” says Eoin. “I was kind of upset by how negative the reaction was to Kanye headlining Glastonbury. Having strong opinionated figures in pop music is really important, say, rather than someone like Sam Smith. I haven’t heard a bad word against Sam Smith but people are quite happy to slag off Kanye West. It’s important to have Glastonbury headliners making statements, because nobody else is going to, especially at his level.”

From hip hop heavyweights to Birmingham’s contemporary music scene, Eoin it turns out, is a fan – but for Swim Deep this has not always been the case. “When we met Swim Deep there was some weird tension going on. They cut into our soundcheck by about an hour and we didn’t properly make up for about a year, and it didn’t help that every festival we played they were on after us. But they really are, like, the sweetest guys. Birmingham’s got a strong musical scene and it’s really good that all those bands look out for each other, like a real community.”

And as with most people in their early 20s, Eoin’s current career is successive to his first…as a Pokemon master. After having  noticed a post on Drenge’s Twitter simply saying “GOTTA CATCH ‘EM ALL”, it was essential to ask him about his Pokemon career. “If I was in a bad mood and school hadn’t gone well I’d take it all out on this little Pikachu. I had the yellow version so he would follow me around. You could be really mean to him and starve him then see how he was feeling, and there’d be this really weird picture of his face. It was like some weird level of torture.”

Thankfully for Pikachu’s sake (and ours), Eoin now vents himself via Drenge. Now he travels across the land, searching far and wide, with each Drenge show, to understand, the power that’s inside.

Drenge are live at The Institute, Birmingham, on April 11 and their new album Undertow is out now via Infectious Records. You can read our review of Undertow here