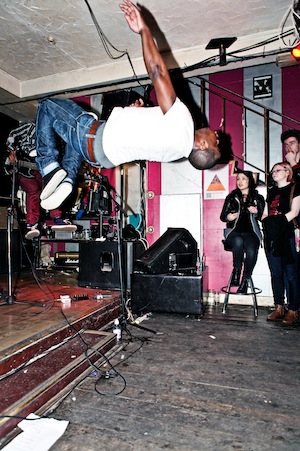 Energetic outfit Layers headline the next Brum Notes Presents show this Friday at the O2 Academy 3 in Birmingham. Combining soulful vocals, intelligent songwriting and a vibrant, hardcore edge, Layers tell us what makes them tick ahead of the release of their debut EP.

Anyone who has been fortunate to catch Layers live in the past two years will have had a glimpse of what they are all about. Refreshingly action-packed on stage, this is heart-on-your-sleeve music delivered as if every show could be their last. Not that the subtleties of their songwriting are lost among the fireball of energy that is unleashed on stage. But this month’s EP release is the chance to really show what Layers are about, while their headline appearance at the O2 Academy 3 promises to be something very special indeed.

“It’s been a while,” says guitarist James Thompson (known as Thomps), explaining just how excited the band are about their EP release show. “We’ve been prepping for this for some time now.”

“It has been a long time,” continues frontman Lance Joseph. “I think we’re all just start- ing to give the people what they’ve wanted for so long now. We’re stoked about it, we really can’t wait.

“Yeah, a lot of work has gone into it, there’s gonna be a few surprises!” adds drummer Elliot Vaughan, intriguingly. “It’s a theatre performance, more than just a gig.” Not that the band will be drawn on what some of those surprises could involve. “Just expect there to be some amazing things going down that you may not see at a normal Layers show. That’s all you’re getting from me,” insists bassist Nick Ebanks. But “plenty of energy, lots of interaction, throwing shapes, lots of physical contact,”are just some of the other choice phrases thrown out by the band when attempting to describe what’s in store. By now you should have got the idea. Layers are a band who like to put on a show. 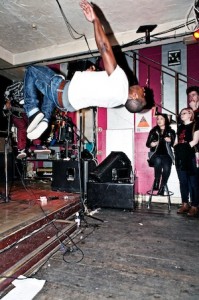 Frontman Lance’s on-stage acrobatics understandably gain plenty of attention from often unsuspecting onlookers. So where did he first learn such eye-catching skills and has it ever gone wrong?

“Well, I’ve been doing it since I was about nine or 10 years old,” he explains. “My brother is a professional free runner, so I learned a lot from him. It hasn’t really dramatically ever gone wrong really, but there was one occasion that we played in Stourbridge. Someone spilt a drink on the floor [in front of the stage], then basically as I’ve landed I’ve kind of slipped over and just hit myself in the face, bust my lips open and nearly lost my teeth. Yeah, that’s about it. I love what I do and I do it for the show, I do it for the people. I don’t really think about it when I’m doing it so if it does go wrong, it’s gonna go WRONG!”

Of course, the live show will not just be an introduction to Lance’s trademark stage flips, it will more importantly represent the launch of the debut EP from Layers, out on September 16 through Till Deaf Do Us Party Records. After the rest of the band all effectively dodge the question by chuckling their way through some less-than-insightful answers (”It’s called ‘Layers’…it’s self-titled… it’s eponymous…”), it’s left to Thomps to shed some light on what fans can expect from the record.

“It’s basically a great introduction to the band because it’s all our work for however long it’s been since we started,” he explains. “The best part of two years work writing as a band and as much as the band has evolved, the songs have evolved as well, they’ve been rewritten, reworked and you’ll prob- ably hear it mature from our previous efforts, as a whole.” “I’d say if I were to describe it I’d use the words ‘exciting’, ‘heartbreaking’, and ‘diverse’, there you go,” adds Elliot, confidently.

 After two years together as an outfit, the five tracks that make up their new EP have been a relatively long time in the making but all came together in a rather swift five days when it came to putting them down in the studio.

“I think the stage show will reflect how long we’ve been together and how long we’ve actually been practicing the songs,” says Lance. “The reason why we can go in the studio and knock it out in five days is because we are that familiar with the songs, we’ve practiced them a lot and worked hard at it.”

The music that Layers produce certainly reflects a lot more than just the two years that they have been together, with four lifetimes’ of influences producing a genre-hopping blend of metal, rock, RnB and even some unashamed pop hooks. The diversity of their sound is something that is very often brought up, but can the bandmates themselves pin down what goes into it?

“Well, I grew up with a lot of reggae, RnB, hip hop influences,” begins Lance, “I’ve never really narrowed myself down in life so I’ve had a lot of influences, but my main influ-ences are reggae, soul, RnB really.”

“Speaking for myself, I’m from a rock background,”explains chief axe-thrasher Thomps. “Grown up on a lot of British rock and metal and all sorts, but at the same time I like a lot of stuff that Lance likes, reggae, soul that kind of thing as well – guitar music really.”

“I like pop really, at the end of the day,” admits Nick, “any kind of genre, but I’m a real sucker for a catchy chorus or a melody, you know, something I can listen to over and over and over again and not get tired of and I guess that’s what I bring to the table hopefully, parts that you won’t get tired of. Yeah, that encompasses many genres but really the basic thing is that I just love pop, I just love stuff that’s catchy and that’s about it really, for me.”

“It’s all-encompassing,” continues Elliot. “It’s everything we’ve been kind of listening to our entire lives. You’ve got the soul elements in there, you’ve got real groovy, almost pop elements, you’ve got heavy metal riffs, you’ve got big choruses. I mean, I grew up on Brit- pop and kinda got into the pop punk thing and the American alternative rock thing later on and, you know, that comes across in the way I play drums. I think a lot of us have been there and love a lot of those songs as well. We somehow manage to make it all work, I think…”

Whatever you want to call it, there is no doubt that Layers are a band who can make some noise. So with some the region’s most recent success stories being known for a hazier, more chilled out sound, are they looking forward to showing that there are still plenty of Birmingham bands who like to show their teeth?

“Obviously Swim Deep have done really well and Peace as well that have come out of Birmingham and there are a whole host of bands that are inspired by those bands in the area and it’s great, you know, it makes for such a vibrant scene in Birmingham,” continues Nick. “But we’re representing the edgier side. We’re just kinda doing our thing and writing music that we like and it’s not really anything that was thought about, It’s just what came out.”

Brum Notes presents Layers live at the O2 Academy 3, Birmingham, on September 20, with support from Dead Sea Skulls and Mutes. Layers’ self-titled debut EP is out now on Till Deaf Do Us Party Records. Tickets are £5 + BF and available to buy here.