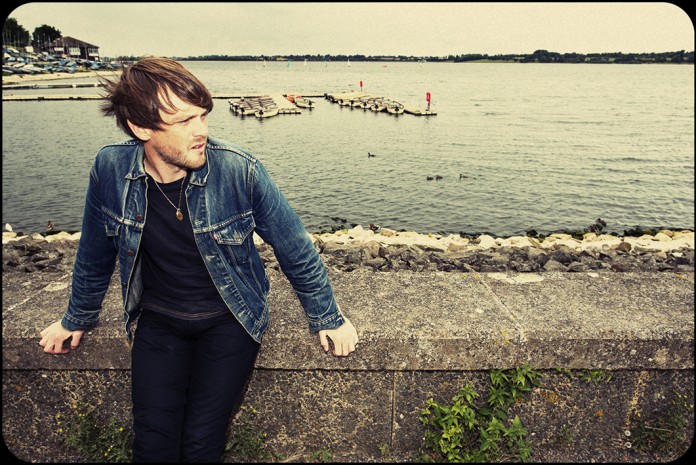 As frontman with Wolverhampton rockers The Lines, he played to sold out venues and toured with some stellar names. But now Alex Ohm has started a new line all of his own as he gets ready to embark on a solo career. He tells Jon Pritchard what’s in store.

“I just want to make music that I enjoy making and hope that people enjoy it too and join me for the adventure.”

And what an adventure Alex Ohm has had so far. With his former band The Lines he’s headlined the Civic Hall, played in America and supported Ian Brown in Amsterdam. But now he’s getting back to his roots and looking forward to keeping things intimate as he takes his new solo material to some of the smaller venues in the Midlands.

After almost 10 years with the band, Alex Ohm is now reinventing the wheel and stripping his songs back. His show at The Sunflower Lounge in Birmingham on July 12 effectively marks the launch of his solo career after a few really small gigs finding his feet and testing out new songs.

“I’ve got to admit that I am looking forward to playing in smaller venues again,” he explains. “I love the intimacy of small venues, being able to take a step off stage and being part of the crowd. I’ve also played a couple of house gigs which I’ve enjoyed a lot. I’m thinking of doing more of those, maybe a living room tour…if people will let me into their home.”

So what does his new solo music sound like? Well, not solo for starters. Ohm has enlisted the help of some of his musically talented friends to help him create the layered music he seems to love to make.

“It’s a mixture of sounds,” says Alex. “It ranges from acoustic to symphonic grandeur soundscapes. Some songs work simply with just acoustic but I’ve been trying to push myself creatively and get the most out of what I’ve been writing.

“It’s nice to have the option of playing alone or as a band, which is what I have now. I’m currently working with some very talented musicians to bring a more complete sound to some gigs and that’s been exciting. I have also enjoyed stripping things right back and just playing alone acoustically.”

But he admits to having mixed feelings about making his comeback, which has seemed a long long time coming for the scores of fans he built up while in his previous band.

“It’s a somewhat daunting but exciting time. There’s a bubbling excitement combined with an air of freedom that’s giving me a real urge to write and play again. It’s strange not having a band as such around me but I’ve been working alongside some great musicians and producers that has given me clarity and sense of direction.”

But it’s not like he ever really stopped making music, or writing songs.

“Anybody that plays and writes will know that it’s something that always just seems to happen, even when you don’t intend to,” he continues. “I’ve had songs in my back pocket for a while that I’ve never done anything with and lots of new ideas so originally it was just the exercise of getting those ideas down for myself really. I don’t think I’ve ever been as content with the outcome of recordings as I am now so I thought it would be good to get them out there for people to hear.”

But has he been listening his previous work with The Lines for inspiration? Can we expect some more thundering drums and riffs?

“Musically I’ve been turning my ear to a mixture of artists from Bon Iver to Fleet Foxes to Lorde to Sivu. There’s a lot of interesting music/sounds out there at the moment.But the inspiration has been the same thing as ever really, life and whatever it deals.”

However, fans can perhaps expect to still hear some familiar sounds.

“There might be a couple of covers making an appearance here and there,” he says with a knowing smile. “I’ve found myself reworking people’s songs more of late and trying to put my own stamp on them which has been fun in ways but in turn has produced some songs that I’ve enjoyed playing alongside my own.”

Alex Ohm is live at The Sunflower Lounge, Birmingham, on July 12 with support from The Shanklins and Duke. Tickets are priced at £5 advance and are available here.