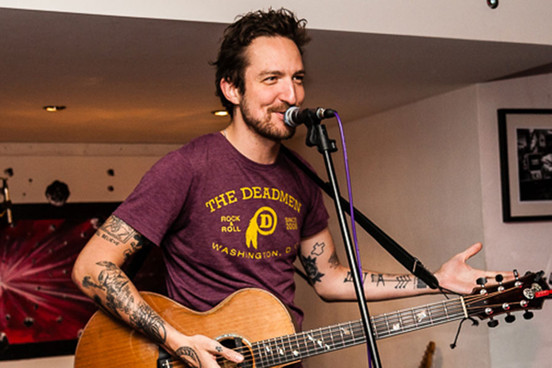 Things may seem to have gone quiet from Frank Turner since selling out the O2 Arena this time last year, but he’s kept himself busy – recording a new album, touring with his hardcore side project Möngöl Hörde and playing discreet shows at unlikely venues. In regards to the latter, he recently popped up at Redditch’s Death or Glory Records’ to celebrate the store’s first anniversary and its dedicated support of the town’s independent music scene.

And whilst he may have cornered the arena-folk market, he evidently hasn’t lost the common touch – this solo performance to 70 people on February 21 seeming as natural as playing to 20,000. Placed on a bill that also featured local heroes The Hungry Ghosts, who took things deep into swampy and dark electric beatnik territory, Electric headlined with a bright, eclectic mix of nuts-tight alternative party rock, proving that it’s not just Frank that still believes in the power of Rock & Roll to save us all.