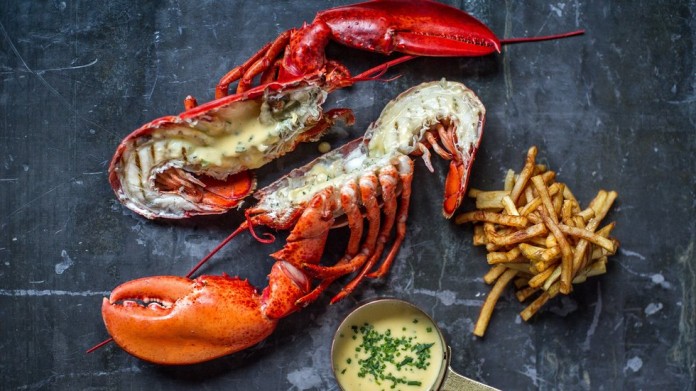 Psssssst…want to get messy? Nosh and Quaff, the latest offering from the Lasan Group, promises the chance to do just that, dishing up some of the juiciest lobsters and ribs this side of…well…anywhere really. Overlooking Victoria Square, the venue itself is a mix of luxury (the marble walls), industrial chic (the giant copper lamps) and Carry On films (the ‘Squeeze the juicy flesh’ neon sign…oooer missus). Speaking of which… it’s not often that the ‘lavs’ are worth a mention too but these ones, replete with original Victorian brick tiles, are well worth checking out. 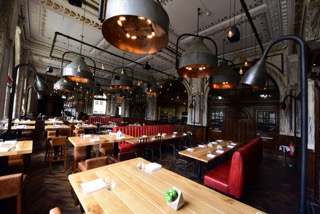 Enough of the decor, what’s the nosh like? Well the menu’s small but perfectly formed, with lobster and ribs as the undoubted stars of the show. There’s still something pretty decadent about tucking into a lobster and this one, flown in live all the way from Nova Scotia, was as good as you’re likely to get in land-locked Brum. Cooked to perfection and served with delicious garlic and lemon butter sauce, salad and crisp chips, it was a sweet and juicy snog from the sea. Here’s a tip though: make use of the plastic bibs they give you. It does indeed ‘get messy’ but that’s all part of the fun of dining here.

Keen to try the other offerings, we plumped (appropriately enough) for the pork ribs and burger too. The ribs, slathered in a zingy, peppery mustard rub, were a triumph: tender, moist, perfectly seasoned and packing more meat than Usain Bolt. They came with a contrastingly crunchy coleslaw, chips and, crucially, a warm towel to wash yourself with after noshing it all down. The burger, whilst huge …seriously huge… was perhaps just a touch overcooked, although as this was one of the first nights that the place was open and it was packed out this might well have just been a little teething trouble. The flavour, texture and seasoning were all spot on though. 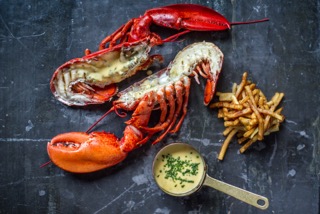 Well and truly stuffed by this point, we couldn’t resist trying a couple of puddings. The deconstructed toffee apple cheesecake was a refreshingly original take on an old classic, with more of a granola thing going on than a biscuit base and light foam to provide the flavour. There was no such messing about with the Rocky Road though; clearly designed to feed a ravenous rugby team, it was a stupendously sticky mass of chocolate sauce, ice cream, brownies, nuts and mallow pieces – all of which probably add up to your entire recommended calorie intake for a month.

A well stocked bar covers the ‘quaff’ side of things. It serves a decent range of drinks: highly recommended are Whitstable Oyster Stout, Mikeller’s American Dream and the Floozy, a light pilsner named in honour of the landmark that the restaurant looks out on (even if she’s now known as the ‘flirt in the dirt’). But it’s the food that will keep you coming back to this place, and for some reasonably priced lobster- and rib-based decadence Nosh and Quaff is going to be hard to beat. 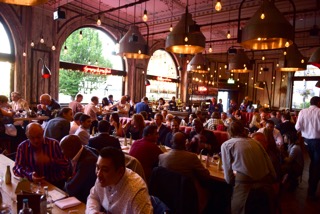