It’s quite cute: a little high-sided box wedged into the city, red-brick walls meeting a ceiling of (luckily) blue sky, the whole thing washed with a nostalgic smoky haze. After scaling back the marketing to give its visitors more space to swing a wrap, it just about escapes the hovery feeling, with seats and ledges to perch on and corners to hide in. There’s a proper bar with many rums, hopped beer and a knockout lemon meringue cocktail: creamy in taste but not texture (the dream, by the way) and perfectly refreshing.

Fleet Street Feast-ival’s thing, they tell us, is chefs not traders. So on first impressions, this is an event about lifelong grafters, not bandwagon jumpers. It seems intended to be gimmick-free, where the food does the talking.

Resident chefs NL Foods assert that they’d never be seen dead serving pulled pork and hot-dogs. They evangelise adorably about “salsa-fries”, spinning the story of one late night’s moment of inspiration, then lives – theirs, chips’ – changed forever. To be fair, they’re fantastic: crispy enough to fend off even a hint of sogginess in the face of lime and peppers; deeply, opaquely meaty in flavour; spiked with the slightest slivers of red onion and elevated by piles of finely chopped coriander – leaving us fighting down to the bottom of the box. It’s the kind of thing that could become ubiquitous if it fell into powerful hands.

Tandoori wings are along the same lines: a pleasing flavour trope presented in relatively unusual form. But the other two kinds of wings are disappointing, ‘The Red Ones’ sounding a single flat note of smoke and ‘Zingy Italians’ unable to shake off the unmistakable taste and texture of dried herbs. Plain lettuce on the side is a wasted opportunity; this isn’t a pub sandwich. Give us smoky corn on the cob, seasonal greens, spicy veg. Caramel lollies were extremely well-made – rich and milky, reminding two caramel-phobes why the stuff exists – but missing a quirk: flakes of sea salt, or a little surprise core of pralined nut.

The highlight (along with the fries) was Street Chef’s Thai Meatball Quesadillas, the flatbread alone a masterpiece: a giant, thick, robust pancake, perfectly eggy and fluffy, flawlessly charred. Inside a delicious mess of happy, squishy Thai flavours, in need only of one more squeeze of lime. Coriander popcorn underneath was a novelty at first, then glorious covered with the messy remains of a quesadilla frenziedly inhaled.

So, here we are: at what is essentially a gimmick-free night, but – as with every street food event – there are great things, OK things and not-so-great things. To be honest, on later reflection, I don’t care so much about all that, about Feast-ival’s thing, or about any event’s thing. It shouldn’t be about themes, gimmicks or lack of gimmicks – the important thing is it should be about eating amazing food. Sometimes that’s hot-dogs, sometimes not. I want to be constantly eating new things, whether that’s the same people doing different things or just different people.

Trying not to be gimmicky is great, but the dogged pursuit of that aim risks becoming itself gimmicky. And it can also throw out the baby with the bath-water: the Bournville Waffle Company – eschewed by Fleet Street Feast-ival in favour of an (albeit hilarious) couple from Cannock – hold a monopoly for a reason. Apologies for snobbery, but dark chocolate, homemade fudge and cookies beat bottled sauce and squirty cream hands down.

Basically, I want no one to be complacent: not the usual suspects with their big hit, but not the chefs either. I just want delicious food and somewhere great to eat it.

The next Fleet Street Feast-ival is this Friday 10th July, 5pm til late. Visit Taste & Liquor for more information.

If the scrum in the car park is anything to go by, Wolverhampton welcomed its first dedicated street-food event with open arms. Street Banquet put on a varied spread – pancakes, fries, scene stalwarts 63 Islands and more – but the stampede at Wolverhampton Rugby Club was such that by evening most of the last foods standing were the burgers. What a shame…. 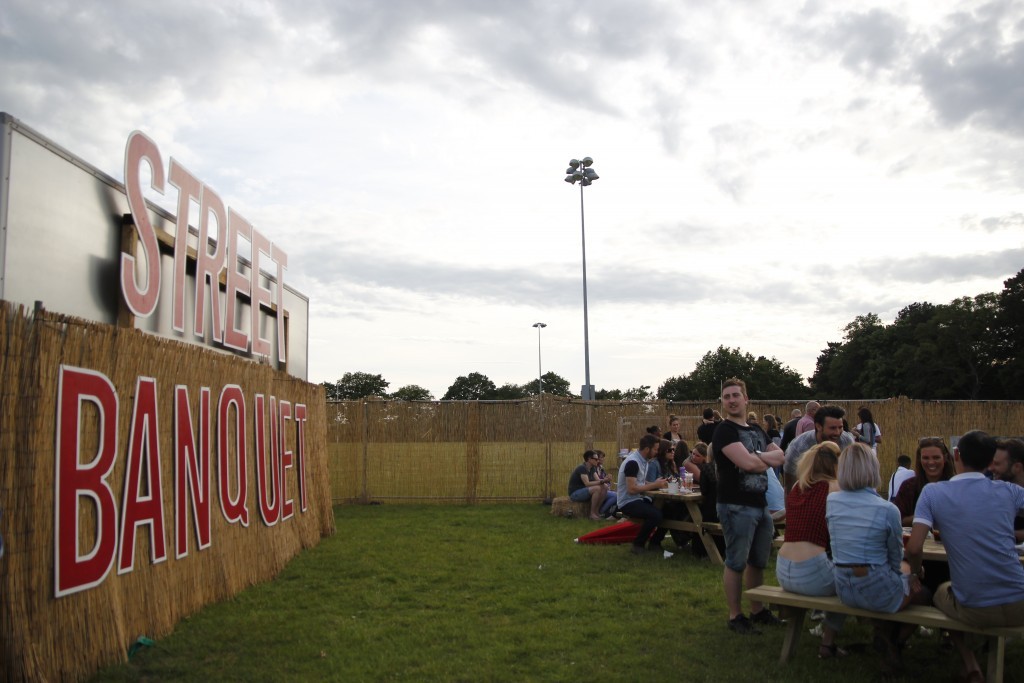 Burger Day got off to a roaring start with Sheffield-based outfit Cow Boys, proffering sweet-salty food heaven in the form of the Cownut: freshly fried doughnut bun, maple syrup, bacon bits. As anticipated, it was an intensely enjoyable experience: a ferrero rocher fried crunch into an immersive centre of meat and maple syrup and the salty shout of cheese. It was perfectly constructed – less carb-heavy than it could have been (practically a salad…) – but needed something else cheering for savoury’s side, a punchy and sharp chilli sauce, perhaps, or whole rashers of crisp streaky bacon.

In lieu of their signature spring lamb, snapped up earlier in the day, La Grande Viande made the proudest noises about their beefburgers with smoked bacon ratatouille. In fact it divided opinion – between being a dream combination and being under- and unevenly seasoned – and wasn’t a patch on their other dish, ‘La Swine’: soft confit pork shoulder on piles of fresh veg, silky mustard aioli lending loudness without heaviness and bolstering jubilant layers of mint, coriander and tarragon.

As in Birmingham, Street Banquet painted the same well thought-out backdrop: a large undercover dining area, masses of seating, some fun giant lettering, local beer and great Langley’s gin and tonics (pomegranate and basil being a favourite). Parachuted into the middle of a field, however, the urban aesthetic didn’t quite generate the same atmosphere. It’s no Lab 11: Banquet without the ‘Street’.