With over 50 members, The Conservatoire Folk Ensemble have certainly earned the title of the ‘UK’s premier folk big band.’

Hailing from Birmingham City University’s soon to be bulldozed Conservatoire, aside the quickly crumbling old Central Library, the troupe are about to head out on their now annual summer tour, with dates including Kendal Calling (29 Jul 2016), Gate To Southwell (12 Jun 2016), and Oxfordshire’s Towersey Festival (where they’ve established themselves as the festival’s official closing act on 29 August 2016).

They’ll also be playing alongside The Destroyers as part of the City Of Sounds festival, at BCU’s Adrian Boult Hall (19 June 2016), but before then, they have their own mini-festival Power Folk 3 – an all-dayer at Digbeth’s Spotted Dog featuring invited guests.

“Awesome new trio Threaded will be playing, they brought out an album this year and the reviews have been incredible so I’m really looking forward to seeing them,” says Folk Ensemble leader/ founder Joe Broughton. “We also have the evening session hosted by Punch The Sky who do a kind of mash-up of folk, rock, pop, swing and Star Wars – they’re a lot of fun.

“You know what the best thing is though?” he questions. “You never quite know what’s going to happen at Power Folk – there’ll be people added to the bill on the day if past years are anything to go by!

“Also, don’t forget the BBQ, what could be better than tucking into your favourite burger in the garden of a really cool pub with more live musicians on stage than you get people in the audience at a lot of gigs!” 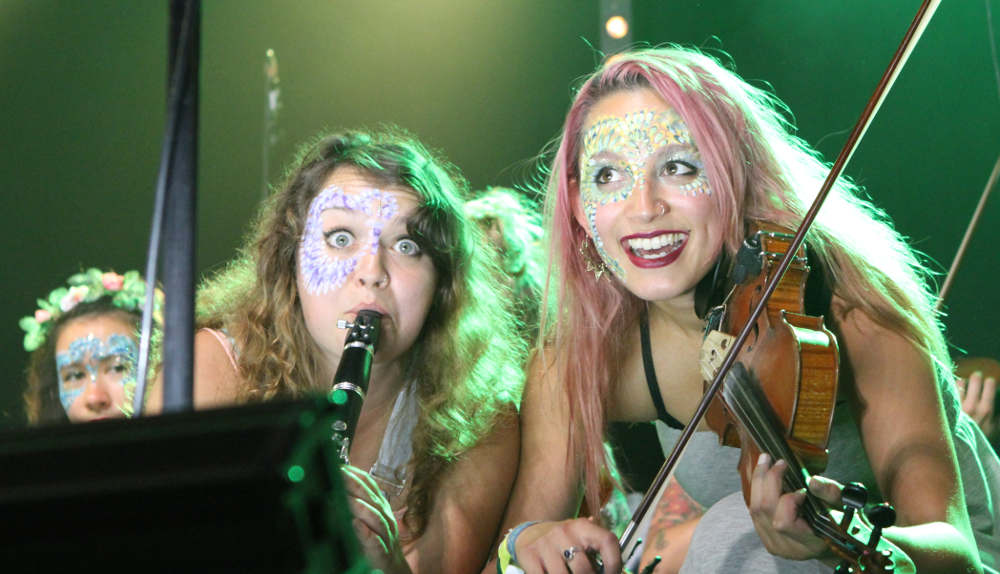 Formed 19 years ago, members of the Ensemble come from across courses at the prestigious Conservatoire, with people like The Old Dance School, Jim Moray (False Lights), Charlie Heys and The Wonder Stuff’s Erica Nockalls all passing through their ever-revolving ranks.

Yet despite the fluctuating membership, and fondness for pulling in a variety of genres, there remains a consistency to the Ensemble, who peddle a very unique and powerful brand of ‘folk’.

And it’s this idea of folk, and the sheer power of several dozen musicians all performing simultaneously, that birthed the Power Folk event.

“We love folk music but we also love it when it has some umph!” explains Joe, who also plays with Joss Stone and The Urban Folk Quartet. “We wholly respect the folk community who want to keep things acoustic but for me I like my folk music raucous, passionate, full of energy and I want to still be able to hear it when a packed house is screaming for more and clapping along – so hold on to your hats, power folk is a noisy one, especially when the Folk Ensemble start!”