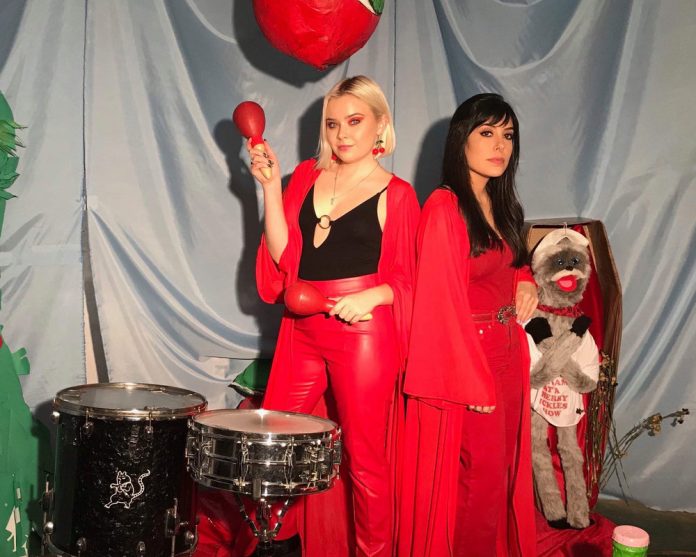 Signed to Swedish label PNKSLM (also home to Brum heroes Black Mekon and Swampmeat Family), the 1960s garage band influenced duo release their debut album – Cherry Pickles Will Harden Your Nipples – on Friday 5 April 2019, and officially launch the record at the Hare and Hounds on Wednesday 3 April (with Bob Log III and guests).

Just back from SXSW in Texas, Pris and Mimi give BrumNotes a track-by-track guide to the album …

Opening track and a recent single (released back in January).

(Pris) This is not a ghost story, this is about not being able to shake the ‘Elvis impersonator syndrome’. I want to be original but you’re pimping me out like Presley! But I love him too much to perform an exorcism. When my lip curls and my pelvis starts to shake, you know what’s happening.

(Pris) This one IS a ghost story! You’re only allowed to use a vibraslap once in your whole musical output, we pressed the launch button on that very quickly.

(Mimi) we definitely wanted maracas in this one to play on the Latin sound and we just started hitting the drums with the maracas & loved the deep sound you get with them. It’s a favourite to play live and we usually start our shows with this theatrical one.

(Pris)  I used to have a dream when I was a kid that about a lovesick alien following me everywhere. When I wanted to make my guitar sound like a warped record (because who doesn’t?) my friend Stef built me a pedal called the Contorted Cherry and it was just like finding the right soundtrack for that dream. So I made a song based on that… but with a werewolf instead of an alien.

(Mimi) We both feel like this song belongs at the end of an ‘80s teen flick, where the girl is at prom and doesn’t know if the boy she fancies will be there but then he turns up & they dance … but he also happens to be a werewolf.

(Pris) When someone at a party once suggested Mimi’s outfit looked like a costume she replied “every party is a costume party”. That line and the rest of the tequila-filled evening inspired the whole song.

(Mimi) I do love dressing up.

(Pris) You know when something is such nonsense that it makes complete sense? I had Tom Zé and Miss Alex White’s songs in my head while I quickly put this song together. It’s about contradiction, it’s about doing it faster to go slower, about closing your eyes to be able to see better, about explaining something to confuse yourself, you get it? It’s musical five finger fillet. Plus, time to bust out the theremin for that extra feeling of vertigo.

We Are The Cherry Pickles

(Pris) I realised we will probably need to introduce ourselves at AA or in court at some point in the near future so I wanted us to have a theme we could play in the room. In Portuguese and English for international travesty.

Ode to The Cramps’ legendary Lux Interior, who passed away in 2009.

(Pris) Don’t you? I’m over all the other dead musicians but I still pine to hear the howl of Lux Interior. We had years of The Cramps and for a lot of those years I took it for granted. You don’t know what you’ve got ’til it’s gone I suppose. I still think he might rise from the grave, if anyone can do it Lux can. This song is also the debut of my saucepan playing which is pretty special, if I do say so myself.

It Will All End In Tears

(Pris) Everyone needs a friendly hand, a calming hug and a pop song to sing along to drunk on Friday night at a shit pub. Love it and then hate it after six plays.

(Mimi) This has sort of become our unofficial anthem. When we play this live, people sing along which is an insane feeling, even across the pond in Texas (though the crowd at SXSW did involve a bunch of our friends)!

(Pris) This one is not what you think it is.

(Pris) Sometimes I can trace the birth of a song and sometimes they are stream of consciousness. Sometimes they are sweet stories about a guy who is tired of the disco scene and just wants a cigarette and a cup of tea and I have no idea where that comes from at all.

Lily is a Spy

(Pris) Just take this one literally, it’s about a spy called Lily who eats flies and has an admirer called Chad (or Jack). It’s definitely not nonsense.