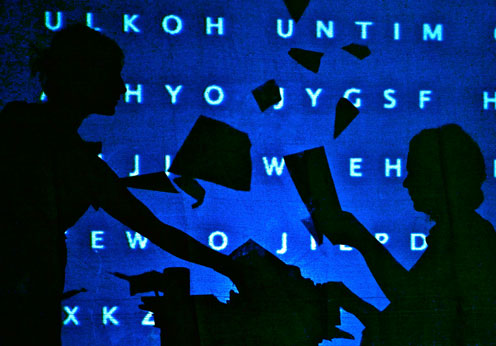 It’s not all just killer music gigs in Brum you know, there’s plenty more going on. So we thought we’d take you on a weekly jaunt around the finest arts venues in the city and beyond, with the best of what the region has to offer for culture vultures and adventurous souls over the coming seven days. Here’s the pick of the week in the first in our brand new Weekly Arts Roundup.

The most spectacular arts event of the week sees Brum’s Universe of Sound season open with a special digital installation. From Saturday (May 25), stop by the Birmingham Municipal Bank on Broad Street for the chance to take part in a virtual orchestra.  As you tap the screens and wave your arms to the score, real-life musicians from London’s Philharmonia Orchestra are on hand to play along and answer your questions. Universe of Sound culminates with a range of concerts and events in mid-June, including a screening of Stanley Kubrick’s sci-fi classic 2001: A Space Odyssey, accompanied by a live soundtrack from the Philharmonia Orchestra. Watch the video below for a flavour of what’s in store.

A rather more sobering experience can be found at the Mac in Birmingham from Saturday (May 25), with Moira Lovell’s photographic exhibition We Still Stand contemplating the Miners’ Strike three decades on – especially poignant now in the wake of Thatcher’s death.

The 2013 Birmingham Architecture Festival runs across the Bank Holiday weekend, with all manner of exhibitions, films and tours to encourage us to “take a second look” at Birmingham. Highlights include two simultaneous Architecture Victoriana tours around the city on Sunday (May 26), photo walks around the Jewellery Quarter and Digbeth, and a photographic exhibition of the Central Library, on display at the Old Joint Stock Theatre on Temple Row.

In Coventry, Katie Paterson’s spellbinding In Another Time continues at the Mead Gallery, in which she attempts to use everyday means of communication to make contact with glaciers and stars, while over at the Wolverhampton Art Gallery, Tipping Point continues to explore art’s response to global climate change.

There’s also plenty for theatre fans to get their teeth into this week. The inventive Idle Motion company come to the Mac on Thursday (May 23) to explore the code breaking of Bletchley Park in That Is All You Need To Know (pictured right).  That’s followed on Friday (May 24) and Saturday (May 25) by a satirical take on modern sporting culture in Ridiculusmus’ show Total Football.

Birmingham’s Crescent Theatre plays host to the story of a troubled former wrestler in The Inferno Kid on Friday (May 24), before Stephen Sondheim’s A Funny Thing Happened On The Way To The Forum begins a week-long run on Saturday (May 25).

The Drum in Aston has the true story of one woman’s family strife in The Secret Life Of Sissy Tancock on Sunday (May 26), while down at the Warwick Arts Centre we’re promised contemporary circus with a twist in Flown, which runs for three nights from Tuesday (May 28).

Universe of Sound – Birmingham 2013 from Philharmonia Orchestra on Vimeo.