BBC Radio 1 presenter Fearne Cotton has just announced that the BBC Music Awards will return to Birmingham in December 2016, once again taking place at the city’s Genting Arena.

The first award up this afternoon is the Best International Artist of the Year: Taylor Swift delivers a video message from Australia, where she is currently on tour.

Adele has been crowned British Artist of the Year in the first of her double honours of the night, as revealed by Rod Stewart. Queen’s Brian May announced her second gong: BBC Live Performance of the Year for Adele at the BBC, A BBC One Special.

Chris Evans and Fearne Cotton presented Jack Garratt with his BBC Music Introducing Artist of the Year Award before a live performance from the multi-instrumentalist.

In the meantime, Hozier popped by to say hello and show off his shiny BBC Music award for Song of the Year – his ‘Take Me To Church was voted as winner by online and text votes.

We’re backstage with Nemone from BBC 6 Music, currently hearing from The Shires – the first UK country act to be signed to a Nashville label. 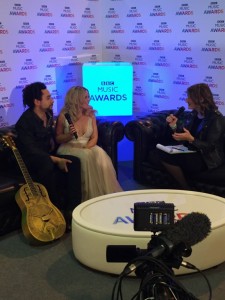 Next up for backstage interviews is Paul Abbott and Jacqui Heaton, who have a busy year of touring and a new album due out in 2016 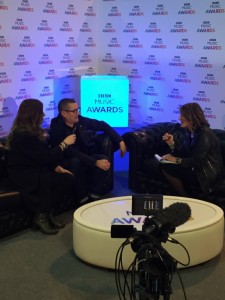 Jack Garratt: ‘This is my first red carpeted experience – its been absolutely terrifying, an adrenalin rush slash panic attack..but incredible’ 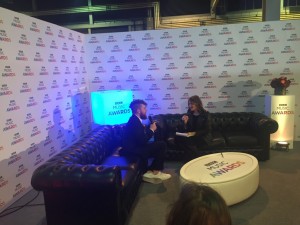 We’ve had the mighty Faithless on the sofa just, talking about their twenty years in music and the everlasting impact of their smash hit ‘Insomnia’. 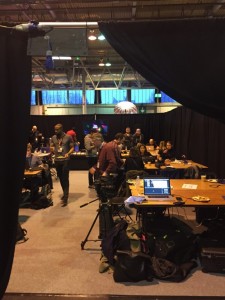 Matt Everitt mentions Edwards No 8, Goldwyns, Jug of Ale and other classic Birmingham venues were he was introduced to live music, before bringing on Tom Robinson and Terry Hall.

Terry Hall cites The Beatles and The Clash as ‘all-round’ songwriters.

Terry Hall: “The Specials song ‘Friday Night, Saturday Morning’ was about my reality at the time. I still love that song”.

We’ve just been treated to a burst of the opening bars of (Sing If You’re) Glad To Be Gay by Tom Robinson.

Another message from Jarvis Cocker: “You have to be ready to harvest ideas when they come to you”

Terry Hall: “Some songs have taken me ten minutes to write, some ten years. I was abducted by a paedophile ring in France aged 12, and it wasnt until I was 23 and writing for Fun Boy Three did that experience find its way out in a song.Songwriting is a way of dealing with what is going on in your head.”

Tom Robinson: If it turns out to be a shit song, finish it so you can move on. The rule of nine – nine pieces of crap for a good one.” 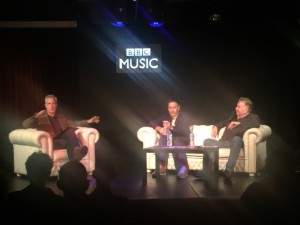 Matt Everitt asks “Do you need to be friends to write?” andTerry Hall answers, “Its more about good communication.”

‘I’ve never understood artists who get rid of their old songs’ – Terry Hall.

“To tap into the place of inspiration you have to be in a certain frame of mind – when you wake up from sleep, that half dreaming world – thats a great time to write. The rhythm of a train journey too – that altered state of consciousness.” – Tom Robinson.

“My philosophy has always been if I can reach four people that’s fine. That’s the line I’ve always used.”

Once you’ve performed a song so many times, it begins to belong to the audience. Ray Davies may think The Kinks’ Sunny Afternoon is his song, but its ours really. It soundtracks our lives.’ – Tom Robinson

We’re back at the Glee Club, this time liveblogging from The Art of Songwriting event – part of the BBC Music Live in Birmingham programme.

More to follow from the event, which kicks off shortly 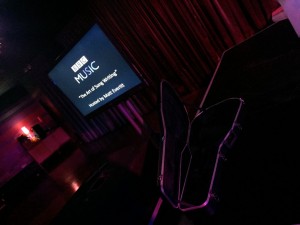 BBC Radio 1Xtra DJ and man behind the Fire in the Booth MC series Charlie Sloth kicks off proceedings here to a sizeable audience at the Glee Club.

On the panel is Dan Jones (PRS for Music), producer and DJ Preditah, representatives from channel P110 Media and management and record label Disturbing London, along with Grime MC Safone.

The topic is How To Make Money in Music 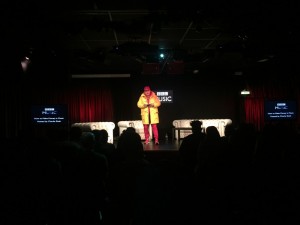 Charlie Sloth is quizzing the panel on ‘How To Make Money In Music’ here at Glee Club Birmingham.

Preditah: ‘I tried MCing for a while but it wasn’t for me – I stuck to beats. But I’m always looking for opportunities’.
Sandy Cheema from Disturbing London talks about the importance of radio play, radio plugging + building relationships with music industry contacts.
Dan Jones from PRS for Music estimates that Adele will earn around £10,000 from radio play of ‘Hello’ in one quarter – registering with his organisation and PPL can pay dividends

Charlie Sloth: ‘Your network is your net worth’

“Nearly every British songwriter is a PRS For Music member” says Dan Jones, citing Ed Sheeran as an example.

Safone: ‘Practice what you do. At the start of my career I didn’t take it seriously until I put my head to it’

Charlie Sloth: ‘Do not approach me for a Fire in the Booth. When you’re ready, I will come to you.’ 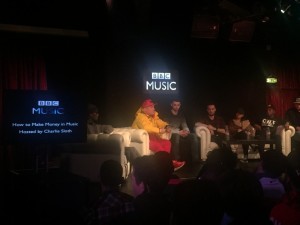 Sandy Cheema: “We look for people with active profiles – don’t just give me a CD saying ‘it’s sick’ – its about the approach.”