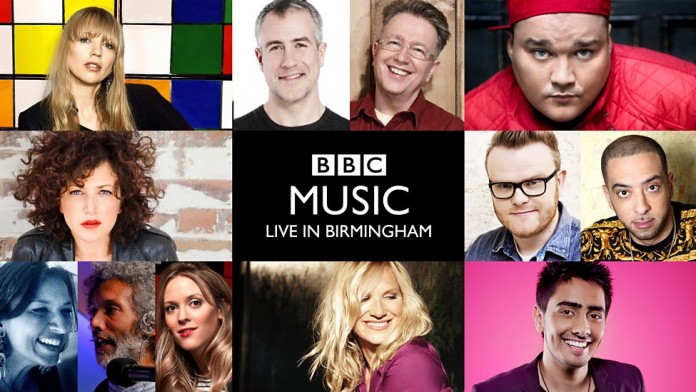 A weeklong programme of workshops, panel discussions and live performances opens in Birmingham this week, with a Q&A hosted by BBC R1 and 1Xtra DJ Charlie Sloth.

BBC Music: Live in Birmingham will see BBC presenters and broadcasters including Annie Mac, Huw Stephens, Matt Everitt and Yasser Ranjha host a series of events, beginning with ‘How To Make Money In Music’ on Friday, December 4 at the city’s Glee Club venue.

BrumNotes-approved artists Boat To Row, Ekkah, God Damn, Lady Leshurr, Hansu-Tori, Terry Hall and Vital are amongst artists from across the region set to appear or perform at venues across Birmingham as part of the week.

Musician, BBC 6 Music presenter and Brummie Matt Everitt said: “It’s excellent to be heading back to the Midlands homeland to host some fantastic events in the build-up to the awards. BBC Music is all about supporting individual artists, bands and the industry at all levels, and that’s something we’ll be focusing on next month in Birmingham.”

“Not only will there be an amazing celebration of 2015’s musical year in the BBC Music Awards, but we are also offering a series of innovative, informative sessions for the people of the Midlands. So come, join in, ask musical questions, get useful answers and find out how you can get more involved in the music industry.”

BBC Music: Live in Birmingham takes place in the lead up to the 2015 BBC Music Awards, to be held at the Genting Arena on Thursday, December 10.

Tickets to all BBC Music: Live in Birmingham events are free and are available at: bbc.co.uk/musicawards. Entrants must be over 16 and under-18s must be accompanied by an adult.

The 2015 BBC Music Awards take place at Birmingham’s Genting Arena on Thursday, December 10 between 4pm and 6pm. Tickets, priced £39 – £53, are available at from bbc.co.uk/musicawards.

How to Make Money in Music, hosted by Radio 1Xtra’s Charlie Sloth

Whether you’re an aspiring artist, interested in working in the music industry, or just love music, this is a Q&A not to be missed! Hear how you can make music your career with artists and industry heavyweights DJ/Producer Preditah, Disturbing London’s Product Manager Sandy Cheema and You Tube channel P110 Media. You’ll hear advice on getting your music heard and played on BBC Radio 1 & 1Xtra. If you’re making music, a performer or a writer, PRS for Music will also be on hand to answer your burning questions.

From Adele to Beyoncé, some of the biggest pop stars in the world are women. But how big a role do women play in the whole industry? Hear from some the UK’s most prominent women in music. Joining Sara will be local rapper, singer and producer Lady Leshurr, Island Records’ Annie Christensen and Artist Manager Margherita Visconti to discuss what influence women have and what more needs to be done to ensure equality in music.

Yasser will host the first BBC Music Introducing session of the week, showcasing the acts that he considers to be some of the finest talent in town – DJ Producer Bambooclart, the multitalented Bambi Bains and singer/songwriter Vaz.

Birmingham: The Biz and the Buzz, hosted by Radio WM’s Jack Parker and Jade Matthews

Music industry figures Lyle Bignon, Tessa Burwood, Lady Leshurr, Adam Regan and Maryam Snape discuss topics including how to get involved in the local scene, music promotion in Birmingham, how to go about crowdfunding, and making a success of local music venues.

BBC Radio 3 presenters Lopa Kothari, Kevin LeGendre and Georgia Mann will host an evening celebrating the breadth of music on Radio 3 with new artists in classical, world and jazz. Artists performing on the night are Birmingham based jazz band Hansu-Tori, world music outfit Project Jam Sandwich and one of the best known accordion musicians of his generation, Iosif Purits.

The Art of Songwriting, hosted by 6 Music’s Matt Everitt and Tom Robinson

Whether you’re an aspiring song writer hoping to learn the key to penning a hit single or just interested in how your favourite musicians create that magic, this is the Q&A session for you. BBC Radio 6 Music is known for its alternative spirit and many of its presenters are active musicians and song writers, so join host Matt Everitt (formerly of Menswear) to look at the process of song writing. Tom Robinson (of 2-4-6-8 Motorway fame) and local pop star and song writer Terry Hall (Fun Boy Three, The Specials) reveal how they go about the craft with contributions from others in the 6 Music team Jarvis Cocker (Pulp), Guy Garvey (Elbow) and Huey Morgan (Fun Lovin’ Criminals).

A Career in Radio, with Radio 1’s Annie Mac

Whether you’re an aspiring DJ, radio presenter or just a fan of good music, join us for an audience with the woman who has the best job in music broadcasting and the man who gave her her big break. From an entry-level job behind the scenes to presenting 20 Years Of Radio 1 in Ibiza this summer, Annie Mac will share the memorable moments of her career at Radio 1 and her adventures DJing across the globe. She’ll be in conversation with Rhys Hughes, Head of Programmes at Radio 1 and 1Xtra, who gave Annie her first show back in 2004.

Radio 1’s Huw Stephens joins forces with Radio 1Xtra DJ Target to present acts that they consider to be some of the most exciting new talent around. Performing on the night will be local rapper Vital, Disco duo Ekkah, singer songwriter Call Me Unique and rock band God Damn.

Whether you’re a struggling musician or just want to ‘work in music’ but not sure where to look, this session will answer all your questions. The music industry is big and varied, encompassing many elements beyond the pop stars. There’s radio, record labels, live music venues, publishers, producers, promoters, pluggers and more. What do they all do and how do they work together to discover new talent and bring it to the wider world? Joining Jo will be Lauren Brennan, Music Producer at BBC Radio 6 Music, plugger Rich Perry, Artist Manager/A&R man Ally McCrae and others who will be on hand to answer all of your questions.

Radio 2’s Jo Whiley hosts a new music showcase with acts that she has specially selected for the occasion. Performing will be local singer/songwriters Lawrence Taylor, Hannah Brown and Tom Aspaul.