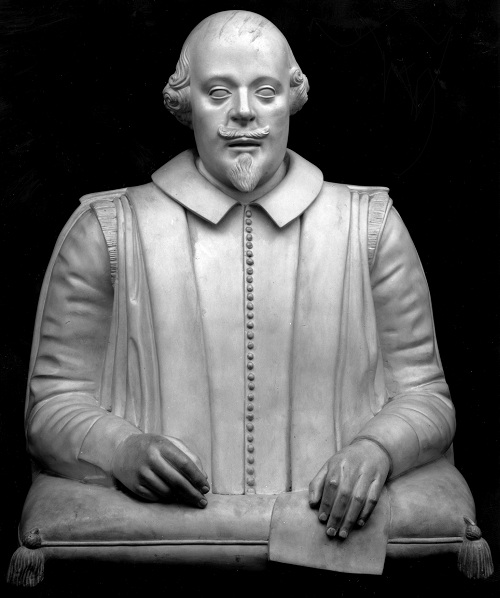 John Kennedy casts his eye over a new exhibition of Shakespeare and his contemporaries.

The unifying conceit of this magnificent collection of portraits, manuscripts and, not least, a superbly-restored First Folio of Shakespeare’s works is that of the impact and importance of portraiture in Elizabethan society. Brum Notes was privileged to be given a private tour and talk by two of the Art History and Curating MA students, Charlotte Bagwell and Sophie Szynaka, who co-curated the exhibition, whose title takes its cue from Jaques’ ubiquitous speech from As You Like It. Character and identity were of vital importance in Jacobean society, their importance and impact cannot be overestimated. Britain was experiencing the rise of an affluent middle class with money to spend and with aspirations to status and position. Portraiture could be a means of self-promotion, advertising and eliciting political advancement, to mark a significant event, and often as a gift through patronage.

Without doubt, as can be appreciated at this exhibition, there was no small measure of vanity and self-aggrandisement. The stunning full-length c.1600 portrait of Henry Wriothesley, 3rd Earl of Southampton is executed with breathtaking attention to his magnificent costume and elaborately-tooled armour. He is documented as being a patron of Shakespeare and was the recipient of the Bard’s dedication in a foreword to the epic poem Venus And Adonis. There has been much conjecture that they were lovers. Not sure who took the role of Venus!

What strikes the visitor is the painstaking research undertaken by the curators to refocus and recontextualise our appreciation that Shakespeare was just one of many highly-gifted and innovative writers at that time. Ben Jonson will be a familiar name to many, and on display is a copy of his First Folio predating Shakespeare’s by several decades (1623). The visitor must not miss the scanned copy of the cast list to Jonson’s play Every Man In His Humour (1598), where they will see a certain William Shakespeare featured in the troupe. Also displayed is Michael Drayton’s Poly-Olbion, a poetic topographical treatise describing England and Wales. He was a Warwickshire lad too, and might well be considered as an Elizabethan Bill Bryson. The curators were rather proud to have had his portrait overlooking the display cabinet where the manuscript lies. This was something of a scoop for the curators as its provenance was only established several years ago.

Yet more conjecture surrounds the portrait of Edward de Vere, 17th Earl of Oxford, who some claimed actually wrote the plays attributed to Shakespeare. This theory loses traction the nearer its proponents get to Stratford. It is about to undergo deep conservation work and promises to be a revelation when the fine brushstroke ermine gown is released from its burden of Victorian “improvements”.

It is worth examining the portraits to discover that many of the subjects were Knights of the Garter. For its candid and homely honesty, the true-life portrait of Ben Jonson, warts ’n all (Abraham van Blijenberch, c.1617) lends the exhibition a harmonious humility amongst the sumptuous, sometimes-shouting braggadocio.

Quite how this team of young curators (and what a CV for their impending job search it will be) have condensed such a balance of beauty, history and thorough but highly-accessible scholarship can only be appreciated in the tasting. And they also compiled the beautifully-illustrated free accompanying booklet.

All The World’s A Stage runs at the Barber Institute of Fine Arts until September 25. For more information, visit http://barber.org.uk/all-the-worlds-a-stage/.