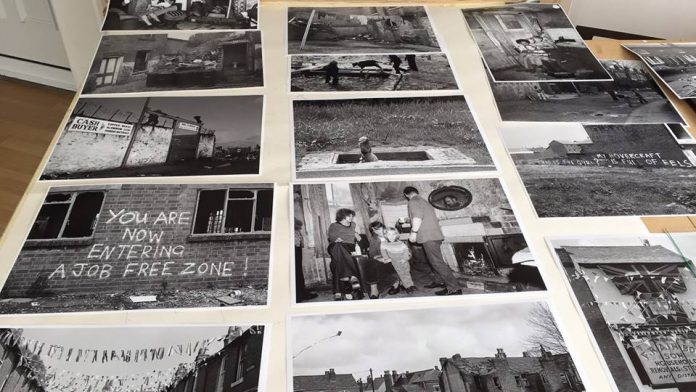 John Kennedy checks out images of Balsall Heath from the late 70s and 80s.

This is but a small selection of the wonderfully atmospheric and evocative photographs of self-taught photographer Mick Turner. The massive archive is still being rediscovered – it extends to over 12,000 black-and-white images, with many more in colour.

The rule of three certainly pays its dues with this intimate exhibition of monochrome images of 1970s Balsall Heath in desperate decline, as the slum clearances of the later 60s still had to impact on isolated conclaves of dreadful deprivation. It was a time of massive transition, as new generations of immigrant families came to find homes and work in the inner cities. Many indigenous families were in the process of moving to the newly-built sprawling estates such as Chelmsley Wood and Castle Vale, often exchanging terrace familiarity for high-rise isolationism. Earlier this year, the Ikon Gallery featured a similarly-themed collection of stark images of late-60s Balsall Heath captured by young American graduate Janet Mendelsohn. Just recently at the Custard Factory, Shelter marked their 50th founding anniversary with an exhibition of Nick Hedges’ work recording likewise phenomena. As with much commentary that followed those previous exhibitions, for those who lived there, reflections do not always dwell on retro-romantic notions.

Mick, a social worker, became embedded in the Balsall Heath community. Because of his skills as a social worker, he could access diverse communities. He witnessed a community at play, at work, in their homes, and chronicled the most amazing images. Some are bleak, but many celebrate the human spirit. There are images of residents’ homes, the legendary Balsall Heath Carnival, street cricket, a donkey being taken for a walk, Jubilee celebrations and the everyday hardworking families who struggled but who were, on the whole, resilient. A true community spirits shines through.

Turner-Prized Images runs at the Print Room At 70b until October 15. For more information, visit https://www.facebook.com/theprintroom70b/.