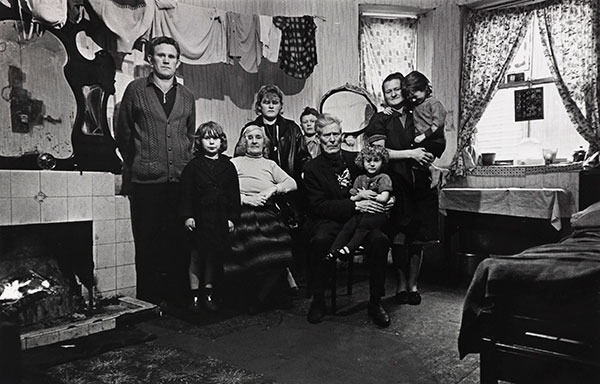 With the housing crisis as acute as ever, John Kennedy looks ahead to an exhibition raising awareness of the work of the charity Shelter.

The recent repeat of the BBC’s groundbreaking documentary-style drama Cathy Come Home re-energised the crisis of the thousands of people who still live in sub-standard accommodation, being near to or actually homeless, and, not least, the iniquities of the punitive “bedroom tax”. Written by Jeremy Sandford, produced by Tony Garnett and directed by Ken Loach, Cathy Come Home’s original 1966 transmission galvanised shocked audiences across the UK. It is difficult for many today to appreciate how powerful mid-60s TV drama could be. It was fortuitous that Shelter was already in the process of being launched when it was first broadcast.

Photographer Nick Hedges dedicated much of his career at the time to documenting slum housing in major cities such as Birmingham, Manchester, Leeds, Bradford and London. His empathic candour was matched with brutal realism, exposing the startling, distressing conditions faced by more than three million people. He donated 1,000 prints from his Shelter work to the National Media Museum in 1983. However, because many of his photographs featured children, their use has been restricted to protect the privacy of his subjects.

Hedges’ first formal exhibition was mounted at the Science Museum in London, late 2014. Many of those images will feature in this show, depicting families existing in squalid conditions in Balsall Heath. Brum Notes readers may recall the Ikon Gallery’s highly-regarded retrospective exhibition from earlier this year of Balsall Heath photographs taken in the late 60s by young American photographer Janet Mendelsohn. It is also worthy of note that very close to the Custard Factory are the offices of St Basils, whose intervention and impact on young people at risk of homelessness across the West Midlands is unprecedented.