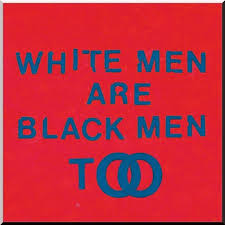 The dilemma faced by most Mercury Music Prize winners of what type of album to put out next – whether to risk musical integrity for the sake of mass appeal – seems to have been neatly avoided by 2014 award-scoopers Young Fathers, purely due to the jaw-dropping brilliance of their second LP White Men Are Black Men Too.

Though not a complete departure from the award-winning Dead, there’s a sense that WMABMT is the album that the Scottish outfit would have made regardless of the success of its predecessor. If said first album won them the label of a ‘Scottish Massive Attack’ existing in a world of schizoid beats and broken reality, its follow-up proves that they cannot be so easily categorised, the LP drawing both from their roots and a multitude of influences, ranging from Naughty By Nature and TV on the Radio through to The XX and LCD Soundsystem.

The main reason for the album’s success though is its total immediacy. For the full 12 tracks, the listener lives and breathes their oxygen, and runs by their rules. From the twinkling xylophone on opener Still Running to the hypnotic, tribal and almost ‘afro-delic’ chorus of Old Rock n Roll, there’s a richness that contrasts with the point blank beats.

Vocally, there’s a richness too. Alloysious Massaquoi’s soulful voice brings a mellow flavour to tracks such as 27 and Get Started, whilst Kayus Bankole makes Shame and Liberated much more raw and hard-hitting, in line with an evangelising MC. At the beginning of Rain or Shine, we catch a glimpse of ‘G’ Hastings on his own, adding a much more vulnerable and fragile style to the mix.

On their sophomore release, Young Fathers have produced an album that stays true to their roots and one that draws heavily from both a musical and social heritage whilst staring intensely into the future.