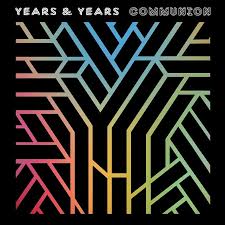 If you’re looking for a softly written, safe piece of Polydor sludge with lyrics stolen from a 14 year old girl’s poetry book, then this could be the perfect album for you. For everybody else, I fear this is not the case. Clever production trickery and a few dancy hooks aren’t enough to make Communion any more charming than an alcopop advert.

From the off, Years & Years sound like they’re a band going through the motions of becoming the next big pop act, opener Foundation lethargically rolls out rather than setting the mood, while Shine’s tacky synths offer nothing. Like all those successful pop bands that have come before them – the 1975, Bastille, London Grammar – Years & Years’ debut is littered with properly bad songs, taking eleven painful minutes to finally grab your attention through single Take Shelter. It’s clear that Years & Years are capable of writing a catchy dance melody, but heard through the tinny salon radios that their songs will inevitably emerge from, their potential is unlikely to be appreciated.

Clever sampling and a radio-ready chorus make King the album highlight, a pleasant break from too many sleazy R&B ballads such as Without and Border. The biggest shame is that many of these tracks could have sounded decent but the beefed-up production leaves tracks such as Eyes Shut sounding like they were recorded through a wall of breeze blocks, similar to an Ace of Base track, only half the fun and twice as self-conscious.

It would have been nice to see Years & Years let themselves go and explore some different sounds but instead they play it safe and their chart success is painfully inescapable, but for now we can take comfort from the fact that, in five years time, this will be nobody’s favourite album. ​