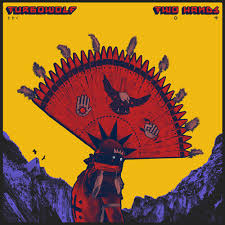 Turbowolf is a pretty ambitious name,  powerful even. But powerful music is what Turbowolf have always put out. While Two Hands’ lead track Invisible Hand starts out calmly enough, led in by a solitary guitar and some foreboding chords, it quickly switches water pistol for Super Soaker and drenches you in riffs. Indeed, it’s hard to describe the sound of Turbowolf simply because they bring a few old favourites and smash them together for something new. At times, they are reminiscent of the best of 70s heavy metal, particularly on Rabbit’s Foot, where chugging verses are bookended by frantic choruses. Then you find yourself slipping into psychedelic and electronic territory with Solid Gold, which almost feels like a Mindless Self Indulgence song, the clear and present drums pushing everything forward and the synth taking a more commanding role in order to lend a trance-like vibe.

However, the real hook of this album is in the vocal performances, with frontman Chris Georgiadis delivering an incredibly varied array of sounds. A talent best demonstrated on Good Hands, where he hits everything from guttural to vocals that soar high above the music.

The only real downside to Two Hands is that there could be more of it. For example, American Mirrors ends after a disappointingly short two minutes and 45 seconds, a real shame as the bite of its guitars and the track’s vocal performance prove that it has the legs to stretch far beyond its actual length.

A sterling second effort but simply not enough of a good thing.