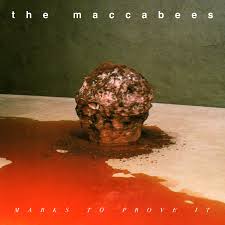 After three long years, The Maccabees are back with their fourth album Marks To Prove It. Recorded at their own South London studios, this record is inspired by the big city surroundings in which it was made. Guitarist Felix White explains how “it became about the night time, the inner city stripped-back and about the band dynamic again”.

2012’s Given To The Wild saw the band experiment with a more mature sound, with frontman Orlando Weeks referring to it as a “fresh start”. Marks To Prove It was always meant to feel like a continuation of that fresh start, but with “none of the tricks”. It’s fitting, therefore, that the album opens with a powerful title track, echoing a raw vitality reminiscent of earlier single Pelican. The mournful Kamakura follows, with uncompromising lyrics that revolve around the turmoil of pub kicking-out time. Orlando’s pained vocals and use of opening piano on Spit It Out encapsulate the album’s theme of emotive storytelling, while the drama continues on River Song, which was tainted in sadness from its beginnings – written after witnessing a rowing couple.

The album speaks from experience, with Slow Sun telling of a realistic love. No more smitten Toothpaste Kisses, but instead tales of waiting up with a cup of tea on the sofa. It’s not all downbeat realism however. Something Like Happiness is full of the allure and life we are used to hearing from The Maccabees, while Silence is somehow both beautifully poignant and hopeful.

This is an assured album, full of sincerity and emotion. A painful writing process led the band to question whether it would happen at all, but it is clear now this process only contributed to the fine result that sees The Maccabees cement their place as one of the country’s most visionary bands.