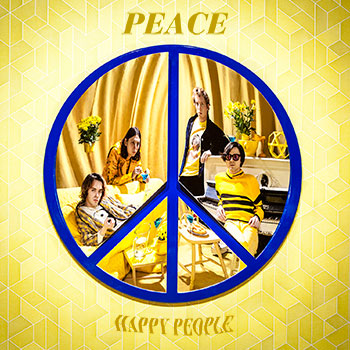 For casual followers of Peace, it might come as a surprise that the Birmingham-bred band clock in at an average age of 24. Teenaged years firmly in the rear-view mirror even at the point of candy-coated 2013 debut In Love, their follow-up further positions them as four sworn enemies to maturity – a gang of starry-eyed Peter Pans appeasing the looming spectre of adulthood with a collection of hooks sharp enough to rival that of Neverland’s famously anatomically-challenged tyrant.

Pixie-dusted joie de vivre in check, Peace’s continued affront to growing old never once shows any sign of wearing thin on Happy People, not least due to a surreptitious change in sound. Jettisoning, for the most part, their first album’s well-worn Baggy blueprint – though pedants will be quick to point out that Money’s percolating funk owes a huge hat-tip to the Stone Roses – the band absorb new styles into their haywire riffing on their second effort, pasting Shard-sized strings atop O You’s perilously-addictive chorus and trialling slushy balladry on Under The Moon before replicating Neil Tennant’s slouching pseudo-rap over the meticulous stop-start grooves of World Pleasure.

Boisterous and excitable throughout, there are instances where Happy People is daubed with sadness, sometimes in the most unexpected of places. The deceptively joyous Perfect Skin declares envy over physical appearance, fully aware that this concern will amplify with the passing of time. Someday, a ballad that hits ‘gooey-eyed’ on the tear-o-meter, more than ably matches it for melancholy. When the crunching guitars of Gen Strange begin to resemble a ticking clock, it’s all too poignant to ignore.

Though often brandished with the retroist iron, Happy People suggests that there’s enviable substance behind Peace’s bold throwback style. Truth be told, we’re a little bit lovesick with this one.