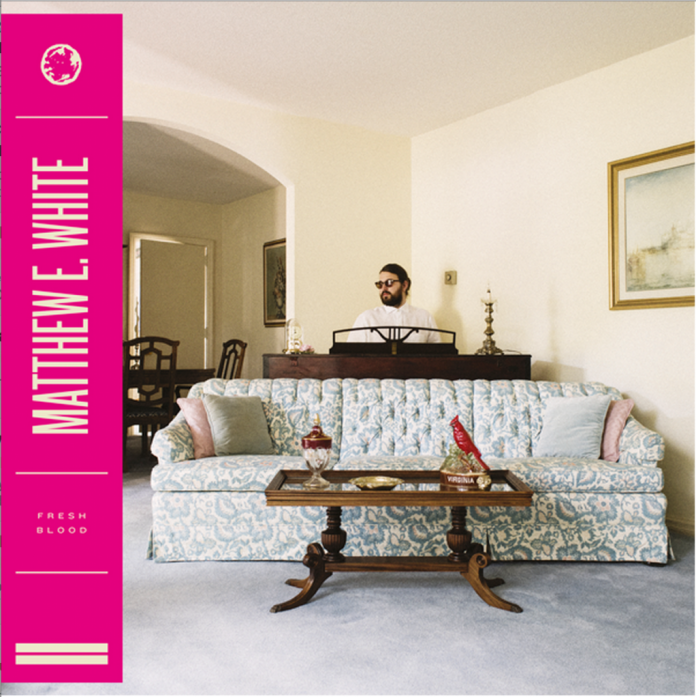 On 2014’s Big Inner, Matthew E White distilled the diverse ingredients of funk, country, gospel, soul and psych-rock into such an astonishing record that it was difficult to see how the Richmond VA singer-songwriter could deliver a follow up of equal value. Happily, Fresh Blood is a clear continuation of White’s exploration of songwriting, bound together by the same solid backline and balanced effortlessly with plush strings, warm female vocals and discordant brass stabs. At the centre of the band’s always majestic, often-familiar and occasionally cosmic sound is the voice of the man himself; molasses-thick, low and soothing, gliding from a gruff whisper in Circle ‘Round The Sun to slightly urgent exhortations on Feeling Good Is Good Enough. There are times where White’s fathoms-deep vocals render his words barely audible over the swell of backing vocals and instruments but these occasions rarely detract from the mesmerising flow of songs like Tranquillity or the outstanding Burt Bacharach-meets-John Grant number Golden Robes. The clearest words on Fresh Blood are often the weightiest, attesting to the singer’s relationship with Christianity through couplets like: ‘Wrap your arms around me Jesus / Move the wind across the sea / in the morning when the sun is up / I keep your company’, amidst themes of love, peace and rock’n’roll. White’s other interests as a jazz bandleader, producer (taking credits on the exquisite debut from label-mate Natalie Prass) and arranger/engineer shine throughout the album, from the boogie-woogie saunter of Rock & Roll Is Cold to the drama of Fruit Trees via the worship funk-rock of Vision. Overall, Fresh Blood is Americana reimagined for the Father John Misty, Bon Iver and Midlake generation, imbued with soul sensitivities and aglow with sounds old and new. A true musical blessing.