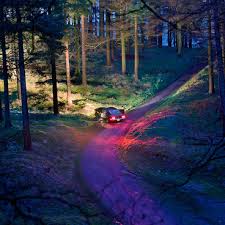 Much more fearful than their aggressive debut, Undertow has neatened up Drenge’s untamed rock whilst still being as bruising as ever. Running Wild and Never Awake both enclose post-teen angst inside deep, grungy vocals, driven along by crashing drums and punkish melodies – these two songs soon pushed out of the way by the guitar-drum chaos caused by We Can Do What We Want.

This time around, the boys’ grimy riffs have an added egotistical pop punch, which makes it seem that they really can do whatever they want. The whole record is an emotional trip, with upbeat claps coming from Side By Side, turbulent riffs arriving within the instrumental Undertow and then a frenzied rage on Favourite Son.

The Loveless brothers are certainly expanding their repertoire and, with the addition of bassist Rob Graham, there’s an added depth to the record, which only heightens the onslaught of rock. But, leaving behind the chugging riffs and battling drums, it’s not all brashness, with The Woods and Standing In The Cold seeming more hypnotic than the rest, preserving the expected distortion and overdrive but not generating the same anticipated thrill.

Have You Forgotten My Name?, though a little hesitant to fully let loose, brings the record back on top, its dark, rhythmic melodies lulling the album to end on an almost ethereal note, something you wouldn’t have expected from their debut.

Undertow is more polished and constructed than anything that Drenge have produced before, but they’ve pulled it off seamlessly. Keeping up the big tunes has paid off.