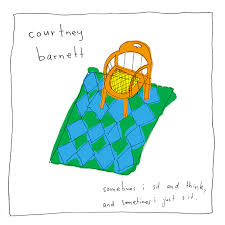 Courtney Barnett has always been described as biting, humorous and clever, and on her debut LP, she really demonstrates why these words follow her at every turn. A dab-hand at delivery, she manages to tread the fine line between expressive and verbose perfectly. The ease and natural way with which she drops a line like: ‘I want to wash out my head with turpentine cyanide, I dislike this internal diatribe when I try to catch your eye’ on Pedestrian at Best is astonishing. The entire album is littered with moments like this, which means that it only gets better with subsequent plays.

Whilst she does spend a lot of time talking about herself with transparency, she does turn her internal monologue to external issues. On Dead Fox she extolls the virtues of buying organic and paints an evil picture of modern life under the foot of the retail giant. Far more straightforward is the dark and brooding Kim’s Caravan, which contains the depressingly relevant line, ‘The Great Barrier Reef, it ain’t so great anymore, it’s been raped beyond belief, the dredgers treat her like a whore’. Clever, biting and humorous are certainly words that suit her down to the ground.

Though this wouldn’t make for a great album without crunching music to back her up. Luckily, this is exactly what her band provides. At times they sit back and soothe with soft drums and minimal guitar, as on the lounge music-inspired Depreston, and at others, they act as your morning cup of coffee in the form of the heady Pedestrian at Best. The only real problem is that the album doesn’t flow all that well, the first three tracks setting up a blistering pace that stumbles after Small Poppies and never really recovers

But, all in all, Sometimes I Sit and Think, and Sometimes I Just Sit sets Courtney Barnett up as potentially one of the most important artists of her generation and is an album worthy of anyone’s time.