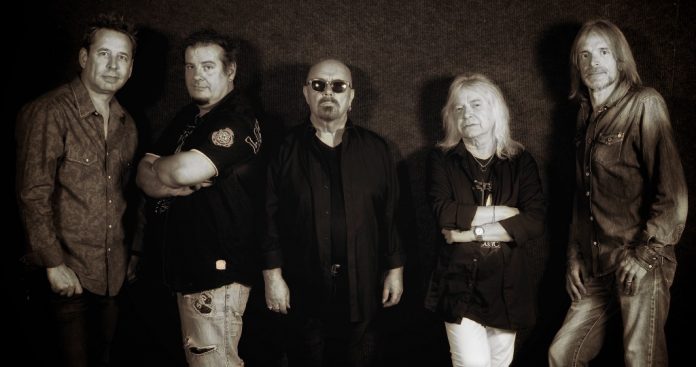 Entitled Lost On The Road To Eternity, the band describe the collection as part of a new creative zenith.

Discussing the creative process, guitarist / songwriter Tony Clarkin states: “As I had started to write the songs even before we embarked on our most recent tour, I subsequently had time to let my initial ideas sink in for a few weeks, which helped me realise that I was on the right path.

“That was a good feeling which inspired me to write more powerful numbers. Apart from that, the usual Magnum formula applied: I go to the studio, try out ideas on the guitar or on the keyboards and do my damnedest to write the best Magnum song of all time.”

Alongside original band members Tony Clarkin and Bob Catley, Lost On The Road To Eternity features bassist Al Barrow (who has been in the group since 2001), along with new keyboardist Rick Benton and drummer Lee Morris. Benton joined the Magnum camp in December 2016 to replace long-standing member Mark Stanway, while Morris took over from Harry James in the summer of 2017.

“Harry has two other bands, Thunder and Snakecharmer, and it became more and more difficult to coordinate our schedules,” Clarkin explains, and confesses; “I must admit that I was reluctant to let him go, but after Lee had drummed for us for the first time and we realised that he adds even more rhythmic complexity to our songs, I’m more than happy with the line-up change.”

Clarkin feels just as positive about his new keyboardist Rick Benton: “Rick has brought a breath of fresh air and interesting ideas into the band. His style is carefully considered and he seems to know intuitively what enhances our material. You just have to give him a rough idea of the arrangement and he immediately comes up with a perfect solution. All you have to do is listen to and enjoy the atmospheric middle part of [album track] Welcome To The Cosmic Cabaret to appreciate what a positive addition Benton is to the Magnum fold.”

Lost On The Road To Eternity is the follow-up to 2016’s Sacred Blood Divine Lies, which hit No.31 in the UK Top 40 on release – Magnum’s highest chart placing since 1990!

Formed by Clarkin and Catley, Magnum were key players in the Birmingham music scene of the early/mid-70s, appearing at such venues as The Rum Runner (later made famous by Duran Duran) and supporting fellow West Mids rock heroes Judas Priest – and later Ozzy Osbourne. They released their debut album, Kingdom of Madness, in 1978, with their 1988 album Wings of Heaven going Top 5. The band were part of a rich rock/ metal scene in the region during the 1970s that also spawned Black Sabbath, Judas Priest, Diamond Head and more.

To coincide with the new album the band play Birmingham’s Town Hall on Friday 2 March 2018. For tickets/ info see: thsh.co.uk

For more more about Magnum see: